Home
»
News
»
Martin Kallen: How to kit out UEFA events 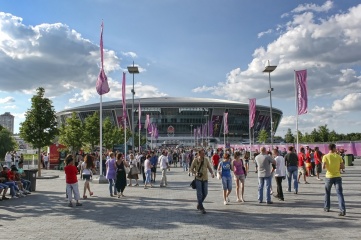 After the Association of Global Event Suppliers’ AGM, HOST CITY caught up with Martin Kallen, Operations Director at UEFA Events SA to discover the changing landscape of infrastructure requirements

HOST CITY: Does the location of an event have a big impact on infrastructure requirements?

Martin Kallen: We would like it to be similar all the time – that would be easier for us, but wherever you go it’s different.

Of course we have our criteria and documents we provide to stadiums and organisers to ensure that they meet certain standards. The standards are getting more even.

However they are still different in terms of the size and quality of infrastructure. Some have better broadcasting facilities, better hospitality facilities or better technical facilities.

HOST CITY: How does France compare with Poland and Ukraine in terms of event infrastructure?

Martin Kallen: We have 10 stadiums in France, four of which are brand new, 1 existing Stade de France and five refurbished stadiums. If you go to Parc de Princes, they have rebuilt all the hospitality zones, business seats, kiosks, technical area and refreshed the sanitary areas. The remaining seats will be soon replaced.

Lyon is a completely new stadium. Lens is in principle a rebuild, with the construction of a new roof, hospitality and technical area, replacement of seats, etc. Saint-Etienne is a rebuild as well – it’s almost a new stadium on the old foundations.

Bordeaux is a new stadium and Toulouse made an upgrade of the existing facilities as seating area, kiosks and access control system.

If you compare this to Poland and Ukraine, most of the stadiums there were new buildings, with one or two exceptions.

In Poland, Poznan was a rebuild, but almost the whole stadium was rebuilt. All the other stadiums - Warsaw, Gdansk, Wroclaw - were new.

In Ukraine you had three new stadiums: Donetsk was finished two years earlier for the club FC Shakhtar Donetsk. Kharkiv was similar to Saint-Etienne, where they rebuilt the stadium on old foundations.

France is further ahead at this stage in terms of finishing – the infrastructure of most of the stadiums is now delivered. The last one Lyon, will be finished by the end of this year, whereas in Ukraine and Poland a lot of the stadiums were delivered in the last year and two close to the start of the tournament.

It is difficult to compare a rebuilding with a new stadium. You always have some challenges because there is a link to the foundations of the stadium, access and so on. If they were built in the seventies, eighties, it’s not the same as today.

HOST CITY: What opportunities are there for event infrastructure suppliers in France?

Martin Kallen: On the overlay side, we are now doing the last tenders. All the suppliers have put their tenders in. It’s now coming almost to an end, because the work will start next year but the tendering process is taking place now.

On the stadium side, all the suppliers were chosen by the stadiums because, except Lyon, the last ones will be delivered by this summer.

HOST CITY: What are the main criteria in choosing a supplier for a UEFA event?

They also need to be sustainable. This means that what they are putting in also needs to be taken away and recycled, or ideally reused in a different form; and when it comes to waste management, that it’s not all going in the garbage – it needs to be sorted or treated. The more it can be reused, the better is the sustainability of the product.

What is also important is the price. It doesn’t always need to be the cheapest price, but it needs to be a good balance between quality and cost.

Taxes in different countries are always a challenge for suppliers, because they have to establish daughter companies, to recover VAT etc.

For us, the suppliers are very important for the events, as they are in principle specialists in many areas.

Through the Association of Global Event Suppliers (AGES), they can exchange their knowledge, information, issues, problems, challenges and best practice – this is a very good initiative.

HOST CITY: How will EURO 2020 differ in terms of event infrastructure?

Martin Kallen: The first big difference is that infrastructure in most of the countries is already ready.

We have only two locations where a new stadium will be built; one in Budapest and one in Brussels.

The other stadiums are already state of the art. We have to put on the EURO overlay; we will start working heavily with the stadium from approximatively 2018.

The overlay required for a big event is mainly for broadcasting and media facilities; then it’s hospitality, commercial facilities and all areas which will be either inside existing stadium premises or temporary facilities built outside. But it’s too early to give further information on that, because we have started the project not long time ago.

Martin Kallen: We have different challenges. The biggest one is surely to have a good EURO atmosphere in all the 13 countries as each one has 4 matches in only one host city of the country.

The other challenge is to ensure easy transport access. Or to have back to back matches in a host city, so fans can remain in the city until the next match – these are all important points to look at.

Of course you have 13 different countries with 13 different legislations, so you have to analyse how you can build a unified ticketing concept which is the same for a supporter in London, Munich and Baku.

HOST CITY: Will ticket prices be different in different countries?

Martin Kallen: That is a good question. That will be decided at a later stage, whether you can have a set price or a different price category that depends on the purchasing power of the people in the country to buy tickets.