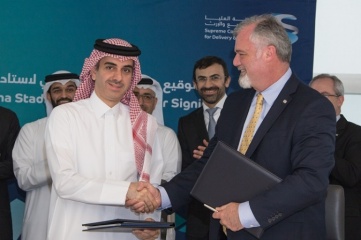 The Supreme Committee for Delivery & Legacy (SC), the organisation responsible for delivering the stadiums and infrastructure required for the 2022 FIFA World Cup, has announced the main contractor for the stadium being built in Doha’s Al Thumama district.

Arab Engineering Bureau, the oldest architectural and engineering consulting firm in Qatar, was confirmed in 2015 as the Design & Construction Supervision Consultant for the 40,000-seater stadium.

Al Thumama – a proposed venue for the 2022 FIFA World Cup Qatar - is the seventh stadium for which the main construction contract has been awarded. The venue, located just minutes from Hamad International Airport and in the centre of the urban development of Qatar’s capital Doha, is scheduled for completion by 2020 and will host FIFA World Cup matches up to the quarter-final stage.

SC Secretary General, Hassan Al Thawadi, said: “We are delighted to award the main contract to AlJaber Engineering and Tekfen as a joint-venture. The stadium in Al Thumama is located in one of the most rapidly developing areas of Doha. Once ready, the stadium and its surrounding precinct will not only become one of the capital’s central sporting arenas, but will also serve the local community as a central community destination.

“I am confident that the signing of Al Jaber Engineering and Tekfen Construction, one of the leading construction companies in Turkey, will deliver an outstanding, legacy-oriented stadium for a historic tournament.”

The stadium is located in an area of 515,400 square metres that already comprises four outdoor training pitches and office facilities currently used by the Qatar Football Association Technical Committee. The stadium will have a reduced capacity of 20,000 seats in its post tournament legacy mode as part of the SC’s modular stadium legacy plans.

Eng. Hilal Al-Kuwari, technical delivery office chairman at the SC, said: “We’re pleased to bring together two firms as reputable as AlJaber and Tekfen to deliver such an important project for the SC and Qatar. The awarding of this contract represents another important project milestone, coming at a significant time as Qatar and the SC move beyond the half-way point in its World Cup journey. The appointment of a local company in this joint venture also demonstrates our commitment to ensuring the economic legacy for Qatar, post 2022.”

Construction began in Al Thumama in mid-2016, with TiME Qatar as the project managers. Most recently levelling and grading works were completed by Boom Construction. The stadium design will be launched in 2017.

All contracts on the stadium in Al Thumama incorporate the SC’s Workers’ Welfare Standards. Contractual enforcement of these standards and a rigorous four-tier auditing system guarantees international best practice on the stadium.