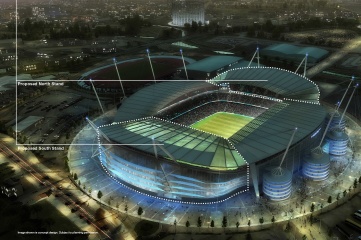 The South Stand will be completed in time for the 2015 Rugby World Cup, with the North Stand following after the event (Photo: Manchester City FC)

Construction work begins on Manchester City’s stadium, redesigned by Populous – and will continue through a hectic event schedule

Manchester City Football Club announced on Monday that ground engineering work on the Etihad Stadium is to begin immediately, with Laing O’Rourke as the construction partner.

The stadium, owned by Manchester City Council, was originally designed with 41,000 seats for the 2002 Commonwealth Games by ArupSport and built by Laing Construction. After the Games, the athletics track was removed and the seating reconfigured to 48,000 capacity for its tenants, Manchester City Football Club.

The stadium has been redesigned by sport architecture specialists Populous. The phase of expansion that begins on the South Stand this week will see capacity rise to 54,000 by the summer of 2015.

After hosting matches in the Rugby World Cup, which takes place from 18 September to 31 October 2015, the venue’s North Stand is scheduled for expansion to bring total capacity to 60,000.

“Manchester City Football Club strives to provide its supporters and visiting fans with one of the best possible matchday experiences in the Premier League and European football,” said Tom Glick, Chief Commercial Officer for Manchester City FC. “The success of this is demonstrated by games being sold out and rising demand from supporters for more season tickets, matchday tickets and premium seating.

“Expanding the stadium allows us to grow that offering as we constantly work towards excellence for every supporter that visits the Etihad Stadium.”

Realising these ambitious plans through a packed event schedule will be a major challenge. "Our brief from MCFC sought to minimise disruption to supporters during the construction phase of the project," said Mike Trice, project director at Populous, the architectural firm overseeing the expansion. "Early engagement with Laing O'Rourke as MCFC's construction partner has allowed us to develop our strategy to limit disturbance to the fans and the ongoing stadium operation.

"Construction of the upper tier requires new columns to run through the existing structure and concourse areas.  The precise location of these columns was balanced against the size of plant that would be required to sink the foundation piles. Laing were able to quickly evaluate the space and program requirements and the availability of plant whilst we considered the spatial and layout implications.  Through coordination with Laing we have been able to use the same columns to provide temporary support for the existing roof, this will allow it to be kept in place whist the works proceed behind the scenes."

Laing O’Rourke, like Populous, worked on a number of venues for the London Olympic and Paralympic Games. Steve Coleby, Leader for Laing O’Rourke’s Construction UK business said: “Our team is known for delivering logistically complex engineering work, combining expertise from across the Laing O’Rourke Group and our specialist businesses.

“This, along with our use of the latest digital engineering technologies, will help us to deliver efficiently with minimal disruption during match days, concerts and other events hosted throughout the year.”