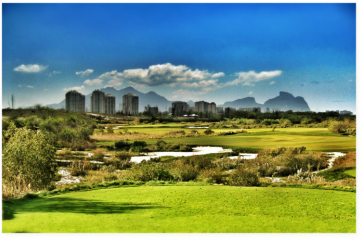 The International Olympic Committee (IOC)’s Coordination Commission’s eighth visit to the “Marvellous City” of Rio de Janeiro gets underway on Monday, ahead of the IOC Executive Board meeting in the Olympic host city later in the week.

The Coordination Commission, chaired by IOC vice president Nawal El Moutawakel, is working with the local Organising Committee and its government partners over the next three days, the IOC said, “to see how Rio’s preparations are advancing ahead of the 2016 Olympic Games”.

The inspection comes shortly after the vice president of the International Golf Federation (IGF) said construction on the golf venue is almost complete – a marked turnaround from the situation last year when concerns over venue infrastructure reached crisis point.

The IOC noted that, with the Games now just over a year-and-a-half away, Rio 2016 now has a number of Games-time initiatives underway, such as its ticketing programme, volunteer training programme and the Olympic Torch Relay.

As well as hearing about these initiatives on the visit to Rio, the Coordination Commission will visit some of the Games venues and listen to reports on a number of key operational areas such as athletes’ services, sport, venues, National Olympic Committee services, International Federation services, accommodation, transport, marketing, media services and preparations for the Paralympic Games.

The progress of Rio 2016 came under intense scrutiny last year, reaching its nadir in April when IOC vice president John Coates described the Games preparations as “the worst I have experienced”.

In less than a year, Rio 2016 appears to have turned the ship around - at least with respect to the golf course, which has received a vote of confidence from IGF vice president Ty Votaw.

"The construction aspect of it is virtually complete," he told Reuters on Friday. "There are a few items that need to be completed, some infrastructure things, but as far as the golf course itself and the design elements and the grassing of the golf course, that is virtually done.

"We just need to continue to impress upon everybody in Rio, the 2016 organisers and the land owners, that all resources need to be brought to bear to get the golf course in the condition that it needs to be to host a competition of this nature."

The course was originally scheduled for a test event in November 2015 but questions have been raised about whether the grass would be ready. Votaw said a test event would take place before Rio 2016 but did not confirm the timeframe.

"We want to get a sense of how the grow-in season goes over the next 60 to 90 days to determine what the chances are of a late '15 or early '16 test event.

The IOC Coordination Commission runs from 23 to 25 February and is followed by the Executive Board meeting, which takes place from 26 to 28 February.