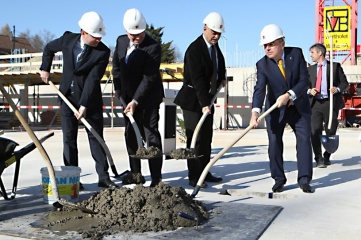 The first stone of the World Archery Excellence Centre was laid in the Olympic Capital of Lausanne today, with IOC president Thomas Bach welcoming the development

The development was welcomed by IOC president Dr Thomas Bach, who said “Archery is one of the most ancient sports, but it has also been an innovator throughout its history and that is shown here at this centre once more.

“We are looking forward to see many future Olympians and Olympic and Youth Olympic Champions prepare here for Buenos Aires, Tokyo and beyond, and if work on the Centre keeps on progressing at this pace, even for Rio.”

The centre is set to become a hub for the development of Olympic, elite and recreational archery worldwide. Construction is set to be completed next year, with the centre opening its doors after the Rio 2016 Olympic and Paralympic Games.

The World Archery Excellence Centre’s design and operational plan is environmentally friendly. The Centre will be heated by geothermal wells, will feature extensive solar panelling and has been designed to maximise the effect of natural light inside the building.

“This is a historic moment for archery,” said Erdener.

“We are very grateful for the support of the Canton of Vaud, the city of Lausanne, IOC president Dr Thomas Bach, the board of FIDTA and everyone else who made this project possible.

“Over the last few years we have seen a dramatic increase in participation and global recognition in our sport. There is still much work to do and as an organisation and a sport we constantly aim to innovate, evolve and development.

“Vital to this mission is the World Archery Excellence Centre: a hub, cornerstone and a state-of-the-art example of archery’s drive to always improve. We are confident that this new facility will help us build on the momentum archery has built over the past few years, serve our development goals and move towards a future where everyone has the opportunity to make the sport of archery their elite or recreational activity of choice.”

Facilities at the world-class venue will include indoor and outdoor ranges for international athletes to train for major international, multisport and World Archery events – including future Olympiads – and a state-of-the-art gym. The Centre will also host theoretical and practical courses for the sport’s technical officials and coaches in its conference and meeting rooms.

The elite facilities will also be used for training camps for young people from the local community and as an outreach centre for archery in the area. The Excellence Centre’s offices will be dedicated to conceiving innovative ideas to develop the sport from grassroots through to elite around the world.