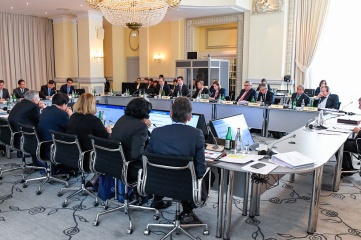 The host cities of the 2020 Olympic Games reported to IOC Executive Board, which approved venue plans for the five new sports and was also "impressed" with progress by Beijing 2022

The International Olympic Committee (IOC)’s Executive Board (EB) today approved the venues for the five sports - baseball/softball, karate, skateboarding, sport climbing and surfing – that had events approved during the IOC session in Rio de Janeiro this year for the Tokyo 2020 programme only.

These additional events were proposed by the Tokyo 2020 Organising Committee using the new flexibility given by Olympic Agenda 2020 for host cities to propose events only for their edition of the Games.

The IOC EB agreed to the following venue proposals from the Tokyo 2020 organisers:

The baseball/softball competitions will be held in the Yokohama Stadium (Yokohama, Kanagawa Prefecture), which is one of Japan’s best-loved baseball venues.

Karate will take place at the Nippon Budokan (Chiyoda Ward, Tokyo), which is already hosting judo in 2020 and, as Japan’s mecca for martial arts, is a legacy venue from the 1964 Games.

Skateboarding and sport climbing will be hosted at the Aomi Urban Sports Venue, which will be a dynamic and innovative temporary facility situated in a spectacular location with Tokyo Bay as a backdrop.

Finally, surfing competitions will be located on Tsurigasaki Beach, which is situated at the southern end of the Kujukuri Beach in Chiba prefecture. The beach is a popular surfing destination and has hosted a number of international and national surfing competitions.

This brings the total number of venues for the Tokyo 2020 Games to 39, including 8 new permanent venues, 22 existing sites and 9 temporary venues, most of which are located in two zones of the city -the Heritage Zone and the Tokyo Bay Zone. These two zones will offer a unique look at Tokyo and Japan to spectators attending the Olympic Games Tokyo 2020.

In addition to updating the EB on operational matters and the new venues, the Tokyo delegation also spoke about the success of their participation in the Olympic Games Rio 2016, with 300 staff taking part in the observer programmes run by the IOC and IPC; Japan House with its 82,000 visitors; and an acclaimed handover segment. The homecoming parade of Japan’s 87 Rio medallists was also seen by a record 800,000 people on the streets of Tokyo, which underlined further the support of the Japanese people for the Games.

The Rio 2016 Organising Committee made its first presentation to the IOC EB since the “Marvellous Games” came to a close this August. In particular, they spoke about the legacy of the Games with 200,000 passengers per day now using Metro Line 4 and 450,000 being carried on the three new BRT lines built using the Games as a catalyst. In addition, according to reports published after the Games, Rio 2016 also delivered an economic impact of USD 21.66 billion, created 1.79 million jobs and had an important tourism impact with 1.2 million visitors during the Rio Olympic Games, who spent USD 304.1 million.

With 428 days to go until the Opening Ceremony of the Olympic Winter Games PyeongChang 2018, the President of the PyeongChang 2018 Organising Committee (POCOG), Hee-beom Lee, presented the status of Games preparations in the next Olympic host city. President Lee reported about the large number of activities taking place in PyeongChang this winter, including the World Press Briefing, the World Broadcaster Meeting, the Chef de Mission meeting, the One-Year-to-Go celebrations, the numerous visits by the National Olympic Committees (NOCs) and International Federations (IFs), and the 24 test events that will see some of the world’s best winter athletes take to the snow and ice already this season in the Republic of Korea.

Finally, Beijing 2022 gave an impressive report on their progress, as the Organising Committee takes shape with 176 staff now in place - 50 of whom participated in the Rio 2016 Observer Programme. The Committee underlined the efforts being made to develop winter sports in China and promote the Games. One example of this promotion was the figure shared by the Beijing organisers that last winter, the number of residents practising winter sports in Beijing and Zhangjiakou alone increased by over 30%, reaching 6.8 million people.