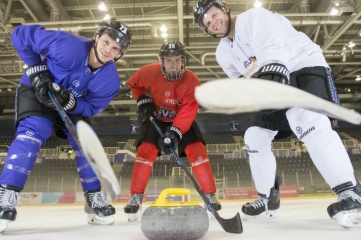 Tickets went on sale on Friday 9 September for the Le Gruyère European Curling Championships, which will see the home ground of ice hockey team Braehead Clan transformed into a five sheet curling rink.

More than 25 nations are descending on Scotland for one of the biggest sporting events of the year, which takes place in Renfrewshire on the outskirts of Glasgow from 19-26 November.

“Braehead Clan are renowned for their passionate following and exciting on ice displays and curling is no different with its intense competition and precision play. We look forward to staging an event here to remember and hope that everyone will enjoy a week of top flight sporting action.”

“The European Curling Championships will see the finest players from across the continent and some of the world’s highest-ranked nations visit Scotland in November, providing a fantastic spectacle for fans at the intu Braehead Arena,” said Paul Bush OBE, VisitScotland’s Director of Events.

“We are delighted to support the event through EventScotland’s International Funding Programme and, following the success of both our men’s and women’s teams in recent years, we are confident there will be strong interest in tickets across the country for what promises to be a thrilling week of action on the ice.”

As well as crowning the European Champions in curling for both men and women, the event will determine qualification for the World Curling Championships in 2017, forming the pathway to Olympic qualification and the 2018 Winter Olympics in PyeongChang, South Korea.

Scotland’s representatives for the 2016 championships will be decided in October. Elite curlers vying for a place in Team Scotland include former European Champions and Olympic medallists Eve Muirhead and David Murdoch.

“We have regular sell-out crowds for our home games and the atmosphere in the arena is electric,” said Gareth Chalmers, Hockey & Operations Director at Braehead Clan.

“We’re sure that sports fans will enjoy watching the curling action up close and wish the European Championships every success.”