Home
»
News
»
How do you recoup a £1 billion investment? 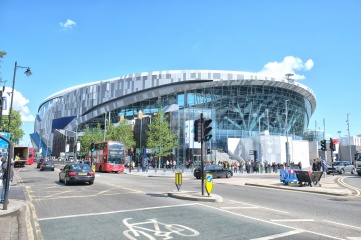 On the surface, the investment of £1 billion on a new stadium could have been better timed. Tottenham Hotspur’s main source of income, TV rights – approximately £210m per year, assuming Champions League football – is undoubtedly on the decline.

As traditional advertising revenues continue to shrink, Sky and the many overseas channels that have cut deals with Richard Scudamore (the timing of whose retirement from the Premier League now seems impeccable) and his band of rights agents in the past, cannot possibly continue to justify the eye-watering billions that have been spent on TV rights.

And so the paradigm shift begins.

On the other hand, perhaps the club’s Chairman Daniel Levy has been exceptionally smart. As traditional revenue streams shrink, so new ones need to be created to feed the voracious financial appetites of the world’s most gifted footballers – and their ever-greedy agents.

At the recent Sports Ground Safety Association (SGSA) conference, Jon Babbs, Stadium Director at the Tottenham Hotspur Stadium gave some indications where the rest of the money is coming from to improve the bottom line.

The state-of-the-art stadium is only the beautifully crafted centrepiece of the overall development. On the footballing side, the site will soon also host a new performance centre and a medical centre. These will help Mauricio and his team continue to generate Champions League income (TV rights, sponsorship and additional match day revenue income combining to generate almost £100m per year), but the bottom line will really be boosted with the opening of the new hotel plus the residential and commercial developments that will become part of the complex.

The stadium has a capacity of 62,214 and is sold out every other week. The stadium will also be buzzing on European nights – when the 42,000 season ticket holders are expected to re-buy their seats! Saracens have also made Tottenham Hotspur Stadium the base for their annual ‘Big Game’ Gallagher Premiership Rugby showpiece.

The impressive South Stand – the largest single terrace in Europe with a capacity of 17,500 – will be bouncing to the rhythm of rock and hip hop from the summer of 2020, adding further to ticketing, merchandising and food and beverage revenues.

Spurs have been super-smart to team up with the Beavertown micro-brewery, combining the economic benefits of home-brew with the longest bar in Europe (65 metres!), 15-second self-filling pints and a cashless environment, to ensure that at least 50,000 pints of beer are consumed by the faithful at any home game. To credit Spurs, prices have not been inflated and the ‘Burger and Pint’ deal for £5 has forced local pubs to reduce their pricing to compete.

Perhaps the most innovative partnership secured by Levy and his board is the 10-year deal with the NFL, which begins with a minimum of 2 NFL games per season and may develop over the decade to the re-homing of a full franchise.

Everything in the stadium whiffs of the NFL: the dedicated changing rooms to house the army which makes up each team; the design of the new hotel (which will have NFL size corridors and beds) and, of course, the ‘pitch below the pitch’. This innovative design allows the soccer pitch to be divided into three for the outside two edges to disappear under the East and West stands, the middle section to disappear under the North Stand, and the fan zone outside of the stadium to reveal the markings of a 5G NFL grid. There can be little doubt that the cost of this magnificent engineering would not have been on the basis of simply twenty games and the odd concert – we can look forward to much more Grid Iron in North London in the near future.

One of the more adventurous money-spinning additions soon to arrive at the stadium is an O2-esque roof walk – going one step further on the adrenaline rankings by finishing the tour with an abseil down from the roof. For Tottenham Hotspurs, the sky really is the limit for revenue generating opportunities.

The challenges of running a football stadium, and lessons learnt from other UK events in near past will be discussed at the UK Sports and Venues Summit at The London Stadium on November 21st. For more information, please visit: https://meievents.eventsair.com/uk-sports-venues-summit-19/ or call O207 709 2350