Home
»
News
»
Handball Arena will be made into schools in Rio 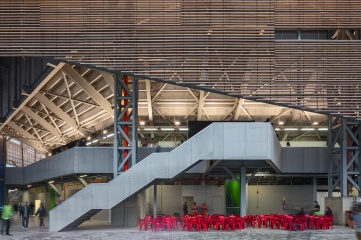 During the Rio 2016 Olympic and Paralympic Games the Future Arena will host the handball events and be packed with 12,000 spectators. When the Games are over its structure will be dismantled and used in the construction of four state schools for two thousand children in the city of Rio de Janeiro.
Three schools will be constructed in Barra da Tijuca and one in Maracanã - each accommodating 500 students – as part of a US$77m legacy project.
The brief for the handball arena was to build something that would contribute to the city of Rio beyond the 2016 Olympic Games. A first for the Olympics, the venue will make use of an innovative technique called "nomadic architecture", thus ensuring that even a temporary structure can leave a lasting legacy.
The arena will be dismantled and the components transported to four separate locations to be rebuilt into state schools. The main elements that will be reused are the roof, rainscreen cladding, main structural steel elements and disabled ramps, which will form the shells of the four schools. The open nature of the rainscreen and external ramp that create the distinctive architecture of the arena will be recognisable in the new schools.
UK-based firm AndArchitects led by Rio-based practice Lopes, Santos & Ferreira Gomes provided the design for the handball arena. AndArchitects’ experience with six temporary buildings at London 2012 helped them jointly win the bid for this ground-breaking project.
Careful thought was given to what materials and systems of construction would allow this transition with minimal wasted material. The schools were designed simultaneously with the arena. The grid for the floor plates and the roof were all designed from the outset for both buildings so that the panels on the façade and on the floor and roof could be easily relocated in order for the modules to work for both buildings.
After the Games, once the arena has been converted into schools, the students will be reminded of their schools’ role in the Olympic Games. One idea that is being reviewed is that the names of the stars of the Brazilian team are engraved onto the cladding of the building and these names will remain on the walls of the classroom to inspire students.