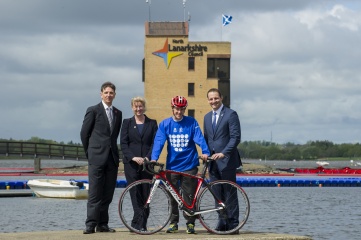 Environmental and infrastructure work at Strathclyde Loch, the host venue of the Commonwealth Games Triathlon event, has progressed to the point where Games organisers have announced that it will be ready to test on May 24th.

Glasgow 2014 is preparing the loch to comply with the standards set by the International Triathlon Union.  The loch has in the past suffered from high levels of blue-green algae.

To prevent algae blooms from happening during the 2014 Commonwealth Games, a designated swim area has been created, separated from the main loch using a series of engineered physical barriers.

The separated area of water was then treated with Phoslock, a non-toxic phosphorous reducing chemical. This chemical treatment was also used to prepare the Serpentine Loch for the London 2012  Olympic Games Triathlon and Marathon Swim competitions.

In addition to the ongoing water treatment works, roads, paths and venue infrastructure are being upgraded to maintain Strathclyde Park’s status as one of Scotland’s premier watersports centres and a proven world-class Triathlon venue.

“I am truly excited at the prospect of world-class athletes striving for Gold and glory during the Games, which was the driving force for all the work done,” said Glasgow 2014 Chief Executive David Grevemberg.

“We are grateful to all our Partners and stakeholders, including the Scottish Government and North Lanarkshire Council, during a combined effort from all parties to prepare the Loch to international standards.

A company called Sniffer has played a major role in the works. “Sniffer has worked with all the partners to facilitate a practical and cost-effective approach to preparing the loch and wider area for the triathlon events within a tight timeframe,” said Ruth Wolstenholme, Managing Director Sniffer.

“We are very pleased with the progress and are confident that the events will be a great credit to Strathclyde Park and those who have worked to ensure their success.”

The Invitational Triathlon takes place at Strathclyde Country Park on Saturday 24 May. “The event will provide an opportunity to validate our Games Time policies and procedures to ensure we are in a position to deliver the best competition experience during the Glasgow 2014 Triathlon event,” said the Organsing Committee, which is hosting the test event.

During the Games, the Triathlon takes place on July 24 and July 26, with three medal events including the new Mixed Team Relay making its Commonwealth Games debut.

More than 100,000 extra tickets across all 17 sports, including Triathlon as well as both the Opening and Closing Ceremonies, will be available from 10 AM on Monday 12 May on a first-come, first-served basis.