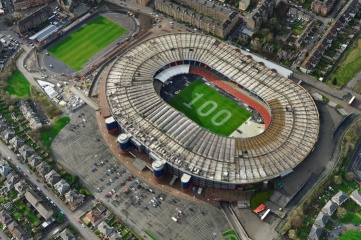 The ground level has been raised by 1.9m to fit in the IAAF-certified track

With 100 days to go until the Commonwealth Games, Hampden Park’s transformation to a temporary track and field venue is put on display

Glasgow 2014 has marked the milestone of 100 days to go until the start of the Commonwealth Games by painting a giant “100” on the pitch of Hampden Park stadium.

Scotland’s national football stadium is in the process of being transformed into an athletics venue for the duration of the Games. Arial footage released today shows that the venue’s transformation is virtually complete.

To attain the width required for the track and field events, as specified by IAAF standards, the ground had to be raised by almost 1.9m using a revolutionary technique. A deck weighing over 1,000 tonnes was made using 6,000 steel posts and 1,200 panels. A further 16,000 tonnes of stone, tar and rubber are now being placed on top of the deck.

Hampden will be the centrepiece of the Games, with more than a thousand athletes competing in more than 48 events in seven days of competition. The venue will also host the closing ceremony, when Glasgow 2014 will hand the Commonwealth flag over to the Gold Coast, hosts of the 2018 Commonwealth Games.

The new aerial shot also shows Lesser Hampden, which has had a new pavilion built to provide athletes with warm-up facilities.

“It is now just 100 days to go until the start of the Glasgow 2014 Commonwealth Games, the biggest sporting and cultural festival Scotland has ever hosted and the UK’s next big sporting occasion,” said Lord Smith of Kelvin, KT, Chairman of Glasgow 2014.

“We are entering the home straight now and these last 100 days are our opportunity to do the final work necessary to ensure that we deliver an outstanding Games for Glasgow, Scotland and the Commonwealth.”

Glasgow 2014, the XX Commonwealth Games, takes place from 23 July to 3 August when 4500 athletes will compete in 17 sports, with 1,000,000 tickets on sale. To find out more, read the exclusive interview with Chief Executive David Grevemberg in the next issue of HOST CITY magazine.