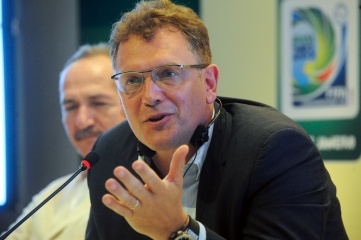 FIFA secretary general Jérôme Valcke has commended the Local Organising Committee for Qatar 2022’s progress on infrastructure, operations and workers welfare, stressing that the “next important step” is to confirm the dates and number of venues by the end of 2015

FIFA secretary general Jérôme Valcke has requested that the Local Organising Committee (LOC) for the Qatar 2022 World Cup propose the number of venues to be used as a “next important step” to be confirmed by the end of 2015, along with the timings of the tournament.

He also commended progress on infrastructure works and evident progress on improving the welfare of construction workers.

Speaking at the end of the LOC’s first board meeting in Doha on Tuesday, FIFA’s secretary general Jérôme Valcke said “We had a very constructive first LOC Board meeting and are pleased with the work accomplished to date by the LOC, especially in delivering a first customised operational plan to the specifications of the host country.

“As we have done with previous hosting partners, we will help find solutions that work best locally including considerations for beyond the event itself.

“Next important step will be for the LOC to provide FIFA with feasibility studies to identify the best number of venues to ensure perfect playing conditions for the teams. We aim to have a confirmation of dates, length of tournament and final number of stadia to be used by end of this year.”

On Monday, a FIFA task force recommended that the 2022 World Cup should take place in late November until late December , with a slightly shortened timeframe than the usual four weeks.

The CEO of the LOC, Hassan Al Thawadi said “We are ready to host anytime depending on the wishes of the global football community.”

Valcke was shown around the building site of the first stadium being built for the World Cup. “It was very encouraging to see yesterday the Al-Wakrah stadium construction site as well as the respective workers living facilities,” he said.

“I am no expert on these issues but I can see that progress is being made, particularly with the standards introduced by the Supreme Committee related to 2022 infrastructure. At the same time, recognising this is a complex issue that is vital for the Qatari authorities to continue to work on with labour experts to ensure that the initiated measures on welfare standards are sustainably implemented for all workers in Qatar and not limited to 2022 projects.”

The main focus of the meeting was for the LOC to present to FIFA its Tournament Operation Master Plan (TOMP), which it describes as a “unique hosting concept based on the compact World Cup”.

The Qatar 2022 LOC will focus on operational planning, tournament preparedness and coordinating with FIFA on all competition related matters.

The Supreme Committee for Delivery & Legacy (SC) – the organisation tasked with delivering infrastructure for the 2022 World Cup and its aftermath – also gave a presentation on the development of stadiums and extensive transportation network links which will connect these and other venues across the country.

“Today’s meeting was a significant milestone as we continue to make progress towards hosting an outstanding FIFA World Cup which will leave a lasting legacy for future generations in the Middle East,” said Thawadi. “This was an opportunity to demonstrate our operational preparations and ensure we are ready to deliver the tournament as early as possible.

“The first LOC board meeting is a symbol that this World Cup is not simply a concept for a tournament that will be held in the distant future. It is evidence that we are working every single day to deliver a unique tournament that will bring people in the Middle East together and build bridges between East and West.”