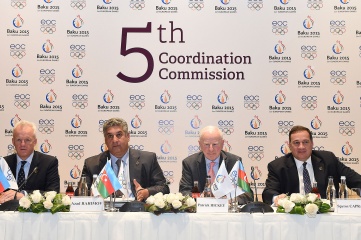 Baku is building the most technologically advanced multi-sports Games

Baku is on track to deliver an innovative Games that will influence future hosts, says the European Olympic Committees, while Atletico Madrid adopts Games branding

On its final coordination commission visit, the European Olympic Committees concluded that Baku European Games Organising Committee (BECOG) still has much to do but is on track to deliver an outstanding first European Games that will act as a blueprint for future hosts.

“BEGOC is entering the final phase of preparations now, and every day counts,” said Spyros Capralos, Chairman of the EOC Coordination Commission.

“But they have delivered on all their construction targets so far and I am very confident that Baku will be ready in good time.

"In addition, these Games will be innovative, which will act as a great blueprint to guide future European Games host cities. I am very much looking forward to coming back in June for the Baku 2015 Opening Ceremony."

Innovations adopted by Baku 2015 include the use of cloud-based technology for both infrastructure and software applications, a model that is set to be adopted by future major sports events.

All of Baku 2015’s venues will be connected by a new 600km optical fibre network, in addition to more than 1,000 kilometres of cabling inside the venues.

The EOC inspection included a tour along the Games Route Network and visits to venues including the Baku Shooting Centre, Mountain Bike Velopark, Heydar Aliyev Arena, as well as a “drive-by” of the European Games Park.

Azad Rahimov, CEO of Baku 2015 and Azerbaijan’s minister of youth and sports said “We now have a little more than four months until the Opening Ceremony. There remains much to do, but the momentum we have built will not falter for a second.

“We will spare no effort in ensuring that the first European Games are an inspirational celebration of sport and friendship for the whole continent.”

Baku was awarded the right to host the Games in December 2012.

“This EOC visit to Baku ahead of the first European Games has confirmed that the city is fully prepared to host an unforgettable event,” said Patrick Hickey, president of the European Olympic Committees. “Baku 2015 will be the perfect launch-pad for the European Games.”

“To have achieved so much in two years is a testament to Azerbaijan’s dedication to hosting the Games, and Europe’s athletes and sport fans will be delighted with the high standard of venues and facilities which await them.

“With 126 days to go before the start of the European Games, we are now entering the final straight, and the visit by the EOC Coordination Commission has been an excellent opportunity to update members on our progress and take stock of what we have achieved so far,” said Simon Clegg, chief operating officer of Baku 2015.

“The Games will be a historic occasion for Azerbaijan and Europe, and we intend to continue working hard to deliver on our commitment to stage a world-class event until the very last guest leaves after the Closing Ceremony.”

The EOC delegation also attended the opening ceremony of the Baku 2015 Uniform Distribution and Accreditation Centre, where participants in the Nar Mobile-supported Flamekeeper volunteer programme will register and collect their uniforms.

In another boost to Baku 2015, it was announced shortly after the EOC visit that Spanish football champions Atletico Madrid will feature the Games logo on the club’s jersey for the rest of the 2014-15 domestic and UEFA Champions League.

“The inaugural European Games represent a great step forward in our continent’s sporting development, and as one of the leading Spanish and European football clubs, we are delighted to be associated with the Games and to promote Baku 2015,” said Miguel Ángel Gil Marín, CEO of Atletico Madrid.

Charlie Wijeratna, commercial director of Baku 2015, said: “Atletico Madrid are the Spanish champions and one of the best-known teams in the world. Having the Baku 2015 logo on the club’s jerseys is an innovative way to raise awareness of the European Games, add value to our brand, and continue to increase the momentum we are building.”