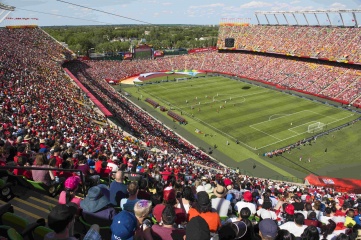 [Source: Explore Edmonton] The City of Edmonton has today confirmed its full support for ambitions to host matches of the FIFA World Cup 2026™.

The news comes with the formal signing of an agreement with FIFA, the final step in the process of FIFA’s Official Host City selection. The agreement includes investment guarantees irrespective of FIFA’s allocation of matches, and a shortlist of firms to assist with the advancement of facilities at the stadium and training facilities.

An announcement by FIFA on the host cities is set to be made on 16 June in New York, completing a thorough two-year process. For Edmonton, this included a visit by FIFA delegates in November 2021, during which the city hosted Canada’s FIFA World Cup 2022™ qualification match against Mexico, selling over 51,000 tickets despite winter temperatures of -9˚ Celsius.

Edmonton is one of three Canadian cities awaiting confirmation as a host city, alongside Toronto and Vancouver. Should FIFA decide to allocate host cities according to the United 2026 bid, all three would become host cities, along with three in Mexico and ten in the United States.

The City’s ambition to become a 2026 host city also enjoys vast local support, with public surveys showing a 93% favourability for the event. Community and business leaders have also been an active part of the process, including via the FIFA Champions Committee, which advises and promotes the work of the candidature. The Committee is chaired by Chief Billy Morin, chief of the Enoch Cree Nation, which forms an especially key part of Edmonton’s candidature given the city’s location on Treaty Six territory.

Upon signature of the final documents, Traci Bednard, CEO of Explore Edmonton, said: “We are more excited than ever by the partnership between FIFA and the City of Edmonton. We have had tremendous experiences in hosting FIFA tournaments in the past, not only in delivering great matches and events, but also in inspiring future generations of soccer players and fans. In 2026, Edmonton will be ready to deliver once again.”

In a recent interview with Inside World Football, Canadian soccer player Alphonso Davies, who grew up in Edmonton, said: “Whenever an international soccer event has come to Edmonton, people have supported the events very well. Edmonton is a beautiful, diverse place, and I have no doubt they will accept the rest of the world exactly how they accepted me and my family when we moved here. Edmonton has some great facilities and there are a lot of things happening in the city, especially in the summer seasons.”

More information of the vision of Edmonton’s plans for the FIFA World Cup 2026™ can be seen via their website here.