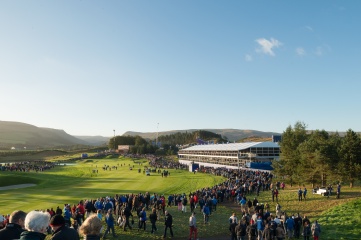 De Boer Structures at the Ryder Cup in Gleneagles, Scotland

If the Rio Olympics has shown us anything, it’s that visitors, guests and delegates are looking for fully immersive and inspiring ‘experiences’ – they’re no longer just interested in attending ‘events’. The London 2012 Games, where we had the honour of building the Athletes’ Dining Hall and the Olympic Hospitality Centre, inspired a generation of event professionals to deliver globally renowned experiences. The most recent games in Rio have only added to that desire.

Our job is to deliver thrilling event spaces, which give visitors a truly memorable experience that will stay with them for a very long time. This is certainly something we have enjoyed working on with our partners at some of the UK’s and Europe’s major events, ranging from the RHS Chelsea Flower Show, the Ryder Cup, Mobile World Congress, Barcelona Open Tennis and the opening of the APM Terminal Maasvlakte 2 in the Port of Rotterdam.

The RHS Chelsea Flower Show is a major international event in the horticultural calendar, drawing 165,000 visitors over the course of the show. Every year 100 exhibitors from around the world create show-stopping displays in the Great Pavilion, the Show’s centrepiece built by De Boer – creating an unforgettable yet completely functional exhibition facility.

In 2000, we were tasked with creating a horticultural palace to replace the much-loved Great Marquee, which had been used at RHS Chelsea Flower Show since the 1950s and likely to be the biggest visual change in the Show’s history. In 2016, we celebrated our 16th consecutive year supplying the Great Pavilion, which uses our iconic Delta structure to provide more space and light.

After winning the contract earlier in 2016, De Boer also created the Ranelagh Restaurant at RHS Chelsea Flower Show, providing 2,800 sq m of hospitality space using its signature Premier and Anova Vista structures. The Ranelagh Restaurant tapped into the traditional garden party experience and featured a decked terrace, allowing guests some respite from the Show whilst listening to music from the specially created bandstand in the Ranelagh Gardens.

Every element of the RHS Chelsea Flower Show from airy first impressions of the Great Pavilion; to the magnificent exhibits; and the garden party-inspired Ranelagh Restaurant, have all been designed to create an awe-inspiring experience for exhibitors and visitors.

At the heart of the action

The Ryder Cup, is one of the world’s largest sporting events and organised by PGA of America and Ryder Cup Europe, is described as ‘the greatest golf show on earth.’ In 2014, it was held at the Gleneagles resort in Perth and Kinross, Scotland. Organisers worked tirelessly alongside their suppliers, including De Boer, to ensure that participants and spectators enjoyed the ‘best ever staging of a Ryder Cup by media, public and organisers alike.’

De Boer supplied approximately 20,000 sq m of temporary accommodation including the Ryder Cup Tented Village, which housed retailers and food service outlets including the Champagne and Seafood Restaurant, the enormous Ryder Cup Striding Man Bar and various interactive facilities for visitors to get involved with. The Village was also divided into three distinct areas; the Public Catering Pavilion, Tay Club Hospitality Pavilion and the Merchandise Pavilion. All of the these structures were shoehorned into a space normally occupied by the Driving Range, so there was a very tight build schedule to adhere to in order to minimise the lost practice facility for golfers.

On the second hole, De Boer built a new structure especially for the event: the curved roof Anova Vista Double Decker, to house the Tweed Club hospitality pavilion. By using innovative curved roof technology, we created a 5m integrated canopy, which spanned the terrace overlooking the 2nd hole from tee to green. Combining this with our ground floor structure, the Premier, this produced the ideal space for spectator sport. It doubled the usual capacity of the structure whilst ensuring unrestricted views, and catapulting guests into the heart of the action.

As a result of the impeccable planning from Ryder Cup organisers and their strong supplier bonds, a report from Sheffield Hallam University's Sport Industry Research Centre (SIRC) has since backed up claims of Scotland hosting the “best ever” Ryder Cup. The report found high levels of spectator satisfaction with their Ryder Cup experiences (92 per cent), with 71 per cent of those attending reporting their experiences as excellent.

It is my belief that innovation lies at the heart of internationally acclaimed events and exhibitions and it is our responsibility, as suppliers, to constantly deliver creative and innovative solutions to enhance the user experience.

At the 2016 Mobile World Congress in Barcelona, one of the largest conventions in the world, we teamed up with the Congress organisers to provide absolutely perfect acoustics and mobile communications – an absolute expectation from exhibitors and guests. In addition, with seven different auditoria, each offering simultaneous presentations, it was essential that each one was soundproof.

Developed by De Boer’s Research and Development division alongside French specialists, we used an ‘Acoustic Barrier Mat’ system throughout the Congress to absorb sound. The Barrier Mat system prevents sound bouncing between hard surfaces and reduces sound reflection meaning that all our structures benefited from improved sound quality. Noise between interiors and exteriors was also heavily reduced, meaning that the seven auditoria benefited from more comfortable sound levels.

Ultimately, it is the exhilarating experiences that guests will remember, like the spectacular automated show that launched the opening of the new APM Terminal Maasvlakte 2 in the Port of Rotterdam – the most advanced shipping terminal in the world.

Working alongside BIND, our team based in the Netherlands built a floating theatre for the opening. The robotic terminal was opened by King Willem-Alexandar and international guests were treated to an extraordinary show watched from the floating theatre that featured 16 large lit up video screens mounted on containers that moved through the terminal.

Similarly our Spanish team built a glamorous two storey structure to house the hospitality pavilion at the Real Club de Tennis Barcelona, Spain’s oldest tennis club, for the Barcelona Open Banc Sadadell championships. The ATP World Tour 500 clay-court tournament is one of the most important events in Spanish tennis and on the Barcelona social calendar.

De Boer designed the hospitality pavilion and splendid interiors for the upscale restaurant on the first floor and the village lounge on the ground floor, both with a sophisticated atmosphere that reflected the overall tone of the championships. Tennis fans enjoyed varied cuisine, glittering parties and concerts that lasted until dawn.

In today’s competitive events industry, only the very best events will stand out from the crowd and leave a lasting impression on visitors, organisers and exhibitors. It is our responsibility, as suppliers, to develop new innovative solutions that continue to enhance events and deliver world class experiences – it’s time to #getinspired.