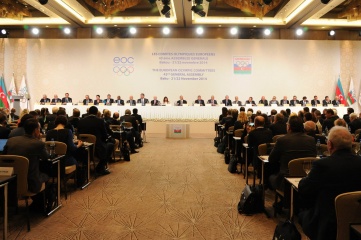 The host of the 2019 European Games will be announced at an EOC assembly in Belek in May 2015. The Games take place in June

As the leaders of Europe’s NOCs face a decade without an Olympic Games in Europe, they are greatly pleased by Baku’s good preparations for hosting the 2015 European Games

Organisers of the Baku 2015 European Games updated leaders of Europe’s 49 national Olympic Committees at the weekend, met by an overwhelmingly positive reaction to the standard of their preparations.

“I am deeply impressed to see the development here in regard to sport,” said IOC president Thomas Bach, who was also attending the EOC General Assembly in Baku.

The optimism surrounding Baku 2015 will come as a great relief to the Olympic Movement, coming at a time when the next Olympic Games, Rio 2016, is under intense scrutiny over its delayed preparations and when European cities have been turning away from bidding to host the 2022 Winter Olympic Games.

The NOC presidents and secretary generals were taken on a tour of the key venues including the National Stadium, the National Gymnastics Arena and the Baku Aquatics Centre.

“I am very impressed at what they have achieved in Baku and the new sports infrastructure is excellent,” said Uğur Erdener, president of the Turkish Olympic Committee.

“The conditions will be perfect for elite performances, I am sure: great venues, great accommodation and transport, and great organisation,” said French Olympic Committee president Denis Masseglia.

“The stadia here are stunning and the facilities for athletes in the Village and around the city are of the highest level,” said Victor Sanchez, Spanish Olympic Committee secretary general.

More than 6,000 athletes from across Europe will compete in 20 sports at Baku 2015. The programme includes 16 Olympic sports, 11 of which will offer qualification opportunities for Rio 2016.

“After seeing the venues and meeting the organisers this week, I am more convinced than ever that Baku 2015 will be an important stage on our road to Rio 2016,” said Russian Olympic Committee president Alexander Zhukov.

Hosted right on the border of Europe and Asia, the European Games is set to be the biggest multi-sport event on the European calendar in 2015 and beyond.

“I think Baku 2015 will be one of the surprise events of next year... They will be a breath of fresh air for European sport, said Vlade Divac, president of the Olympic Committee of Serbia.

“The Organising Committee of Baku 2015 has considered every part of their hosting concept from an athlete and NOC perspective and that is really reassuring for me and my team.”

With the 2016, 2018, 2020 and 2022 Olympic Games all set to take place outside Europe, the prospect of a regular multi-sport event in Europe will be reassuring to European Olympic leaders. “I believe in the future of the European Games,” said Russian Olympic Committee president Alexander Zhukov.

The host city of the 2019 European Games is being determined through a process of dialogue between the European Olympic Committees (EOC) and a number of potential host cities and will be announced at an EOC Assembly in the Turkish resort of Belek in May 2015.