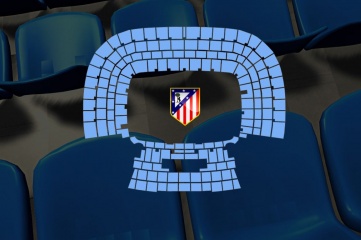 Using Ticketing3D’s virtual reality technology, Atlético Madrid has officially begun the move to their new stadium for the 2017-2018 season.

The relocation process began in June with club members applying online and requesting groups of up to 10 seats for family or friends at any location inside the stadium.

Through a 3D recreation of the new stadium, fans can experience the full panoramic view from the stands and every individual seat.

Although members cannot yet choose their exact seat, the club is assigning specific days and times for each group of members based on seniority between July 2016 and February 2017. This will be followed by a process that utilises a waiting list for non-members as well.

During just the first day of the virtual tour release, more than 25,000 fans visited the club’s web page to watch the video at https://nuevoestadiovirtualatleticodemadrid.com/.

Atletico Madrid’s current home ground, the Vicente Calderón stadium, has a capacity of 55,000. From the 2017/2018 season, the team will be playing in the rebuilt Estadio Olímpico de Madrid, also known as La Peineta, with a capacity of around 67,000 and a broader price range for tickets. Fans can see the different prices for each sector through Ticketing3D technology.

This new transfer process provided by Ticketing3D allows for a significantly faster and more efficient member-relocation process, in addition to offering an enhanced overall experience for the fans.

As well as hosting matches for the first team, the stadium will look to host the finals of national and European competitions.

The new stadium is designed to meet the highest standards of comfort, security and visibility. In order to access and enjoy the seats in the most satisfactory way, the distance between the rows has been increased.

More suitable accesses for disabled fans have also been set up. The location of the vomitoriums and the control of the traffic inside the stadium ensures the maximum safety for the spectators.