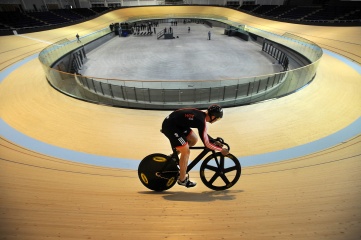 Chris Hoy at the Glasgow Velodrome named after him (Photo: EventScotland)

Glasgow 2014 sponsor Arena Group announces the scope of its plans for temporary overlay, structures and seating at Commonwealth Games venues

The official Overlay and Temporary Structures Provider to Glasgow 2014 has revealed that it is working closely with the Organising Committee to design and install more than 230 structures covering an area exceeding 20,800 m2.

As Glasgow 2014’s Exclusive Temporary Seating Provider, the Arena Seating team has been tasked with delivering every single temporary seat at the Games, around 22,000 in total across 10 venues. The seating team will also be installing camera platforms, wheelchair access platforms, press positions and commentator platforms.

Dave Withey, sales and marketing director, Arena UK & Europe, said “We’ve been collaborating closely with the Glasgow 2014 overlay team to design temporary solutions which make the most of each venue, providing the space and infrastructure they require, without permanent construction.”

The temporary infrastructure project that will be finished first is the official merchandise shop in a Glasgow City Centre location. Arena Group will start building this at the beginning of June.

At the Sir Chris Hoy Velodrome, Arena Group will be supplementing the existing 2,000 seats within the venue with an additional 1,700.  Arena Group will face the challenge of creating perfect sight lines for a challenging sloped field of play, using its trademark "clearview" system.

Contours will also be a challenge at the new Cathkin Braes Mountain Bike Trails venue, where Arena Group will be providing VIP seating at the finish line and structures for athletes, officials and security, all designed to fit against the slopes of Cathkin Braes and provide stunning views of the city.

The clearview system will also be deployed at the Kelvingrove Lawn Bowls Centre, where Arena Group will create a temporary seating stadium and Arena Structures will provide the press, sponsor, security and doping tents.

At the Scottish Exhibition and Conference Centre Precinct (SECC) Arena Group will work with the venue and Glasgow 2014 supplying the seats for Gymnastics, Boxing, Judo, Netball, Wrestling and Weightlifting/Powerlifting.

On the East coast, Arena Group is solely responsible for all temporary seating and structures at the Barry Buddon Shooting Range. Edinburgh’s Royal Commonwealth Pool, built for the 1970 Commonwealth Games, will be kitted out with structures for the security, athletes and officials.

Scotstoun Sports Campus will host both the Squash and Table Tennis competitions, with Arena Group providing structures to the venue and seating stands for the table tennis and existing squash courts.

Arena Group will also create temporary grandstands across three courts at the new Glasgow National Hockey Centre and provide grandstands and all supporting tentage for the triathlon events at Strathclyde Loch.

For Glasgow’s Tollcross Swimming Pool, Arena Group has created a bespoke temporary seating system carefully designed to the fit the confines of the venue’s mezzanine level.

“We have a strong legacy of working within the city and neighbouring Edinburgh, and know many of the venues extremely well, such as the SECC where we have a relationship spanning over 20 years. This knowledge and experience has been extremely useful, enabling us to deliver designs quickly and to spec,” said Withey.

“These designs are now almost finalised and we’re looking forward to being back in Glasgow to start the installation. We’re one step closer to helping deliver one of the best Commonwealth Games in history.”