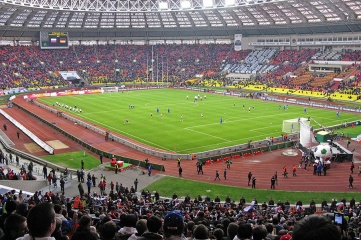 The new hybrid surface will be installed in time for the Confederations Cup in May 2017 (Photo: SIS Pitches)

The FIFA World Cup final will take place on a hydrid of natural and artificial turf for the first time, with SIS Pitches providing the surface for Luzhniki Stadium

The FIFA World Cup final will be played on a surface incorporating artificial grass for the first time ever, after Russia 2018 organisers selected an innovative surface called SISGRASS from SIS Pitches.

A surface of 95 per cent natural grass impregnated with more than 150 miles of specially developed synthetic yarn will be installed at Moscow’s historic Luzhniki Stadium.

The pitch is scheduled to be ready in time for the Confederations Cup in May 2017.

“It’s the first time a World Cup final has been played on anything but all-natural grass and it’s like a dream for us as a company and a community,” said SIS CEO George Mullan.

“We have come so far to get this system to the pinnacle of world sport.”

The patented system was created after SIS Pitches approached Dutch engineers to design a ‘giant sewing machine on tracks’. This machine crawls across a pitch, implanting, or ‘stitching’, more than 240 million precise lengths of two-tone green synthetic yarn 180mm deep into the sub-surface.

“We didn’t want to simply improve on existing machinery. We chose a challenge to create the perfect hybrid pitch of natural and synthetic grass and start from scratch,” said Mr Mullan.

“It strengthens the structure of the natural grass, making it stronger and more resistant to damage which means more games can be played on a pitch. It also drains more effectively. For a busy tournament like the World Cup it is perfect.

“At the same time it is player-friendly. Our polyethylene construction actually gives it a softer feel, with more consistency and greater traction than natural grass alone. That reduces injury risk and the bounce and roll is always even, so the players love all these features,” adds Mr Mullan.

“It was a long tender process but in the end our advantages meant even the local Russian companies could not match us.”

SIS Pitches had to convince the FA, FIFA and a host of international testing bodies that its new system worked better than alternatives. This involved stringent accelerated wear trials by rigorous independent testing consultants STRI.

In these trials the new surface beat unreinforced grass for damage resistance, traction, grass cover and sheer strength, SIS said, claiming that the surface can be used three times longer in all weathers without damage and can be laid in just one week.

Construction work to transform Luzhniki Stadium is underway, due for completion in early 2017. A system of undersoil aeration, drainage, irrigation and heating is being installed to allow the pitch to be used all year.  A custom designed rootzone will be laid, stitched with yarn and then seeded to be ready in time for the Confederations Cup.

During the 2018 World Cup the stadium will host the opening and final matches. SIS Pitches has also signed a two-year deal to maintain the pitch after the World Cup, when Luzhniki will be the home of the Russian national team.

Since its launch in summer 2015, SISGRASS has also been selected for Chelsea, Besiktas, Hull City FC and the English FA’s centre of excellence at St. George’s Park.