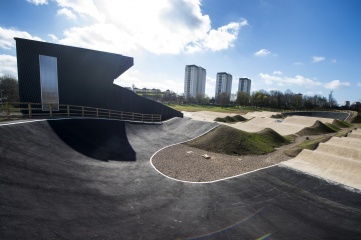 Glasgow is the only city in the world with venues capable of hosting all four Olympic cycling discipline events (BMX, mountain biking, road and track)

Around 4,500 athletes from 52 nations will take part in the championships, which are set to be held every four years after August’s event. And the UK’s biggest multi-sports event since the Glasgow 2014 Commonwealth Games is showcasing novel features in two of its venues.

The Glasgow BMX Centre in Knightswood is the only permanent new venue constructed for the event. The first ever world and Olympic-standard BMX track for Scotland, built at a cost of £3.7 million, makes Glasgow the only city in the world with venues capable of hosting all four Olympic cycling discipline events (BMX, mountain biking, road and track) within its city boundary. All four disciplines are being staged as part of the European Cycling Championships.

The facility, completed in May 2018, features the only outdoor 8-metre ramp in the UK as well as a 5-metre starting ramp. Funded by Glasgow City Council, SportScotland, Glasgow 2018 and British Cycling, the venue is already open for use by the local community. After the championships, it will also be utilised for training by Western Titans BMX Club.

Colin Hartley, Glasgow 2018 championships director, said: “The exhilarating thrill ride that BMX will take us on in August is set to be spectacular, and we’ve got a fantastic venue for it.

“We commissioned the innovative Glasgow BMX Centre to be built especially for the championships and, in doing so, we brought Scotland its first and only world and Olympic-standard BMX track, with a legacy that will last for years to come.

“Witnessing the BMXers take to the track this August will definitely be a moment to remember.”

Home to the Glasgow 2018 Synchro Swimming European Championships, Scotstoun Sports Campus, located in the west end of Glasgow, is one of the busiest sport and leisure facilities in the city.

In the wake of its successful hosting of the table tennis and squash events at the 2014 Commonwealth Games, Scotstoun Sports Campus was chosen to deliver the Glasgow 2018 European Synchronised Swimming Championships. It became an interesting and unique project.

The sport required a venue with a 20m x 25m x 3m competition pool as well as a training pool. Glasgow 2018 organisers thought outside the box and a decision was made to utilise Scotstoun by building an international standard synchronised swimming competition pool – in the indoor tennis centre.

The design team ensured all technical requirements were incorporated into the build, including the installation of a heating, ventilation and cooling system to regulate the temperature of the hall to 27 degrees.

The overlay included: excavation to create a level platform for pool filtration equipment and associated power overlay; construction of a platform to hold an HVAC unit that was craned into position over the building; and complete strip of all internal lighting to install temporary broadcast lighting, a competition PA system and screen rigging truss.

“We’ve got an excellent facility in Scotstoun, so it made perfect sense to build upon this in order to deliver a venue fit for our world-class synchronised swimmers,” said Glasgow 2018 director Hartley.

“Making the venue ready for the events was quite an interesting undertaking, and one we’ve really thrown ourselves into in order to make it as perfect as possible for both our athletes and attendees.

“Our grandstands will ensure everyone is able to see the show-stopping performances in this not-to-be-missed spectacular.”

For the first ever European Championships, a total of 12 venues across Scotland will be used. Glasgow hosts six sports – aquatics, cycling, golf, gymnastics, rowing and triathlon – while Berlin stages athletics at its Olympic Stadium, with the road races and race walking events held throughout the city.

More than 3,000 athletes will travel to Scotland as part of a total delegation of around 8,500 including officials, media and others. A further 1,500 athletes will compete in Berlin.

Festival 2018, an arts and culture programme, will complement the sporting competition in Glasgow and Scotland. “There is something on offer for everyone at Glasgow 2018, with elite sporting action and a unique cultural programme, and we want to see as many people as possible get out to enjoy the events whether that’s in George Square, Go Live at the Green or the sports venues,” said Scotland’s culture secretary Fiona Hyslop.

Organisers of the championships say it has a potential European TV audience of up to 1.03 billion. In a deal with the European Broadcast Union, its free-to-air members, including the BBC, will screen the event across the continent.