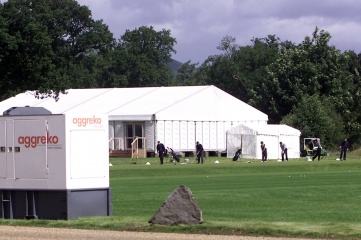 The contract to provide temporary power to the 2014 Ryder Cup has been awarded to Aggreko.

The leading lessor or power and temperature control solutions will provide 17 MW of power and back-up support on location at Gleneagles.

In total, Aggreko will be helping to power and cool around 40 different major temporary structures at the Gleneagles site.

The 2014 Ryder Cup will deploy Aggreko’s especially quiet TwinPack generators, which will minimise sound emissions from power production in and around the golf course.

An half a billion homes in 183 countries worldwide are expected to watch the event. As technical power is crucial for broadcasting, Aggreko will use around 600 distribution boards to connect and feed power supplies around the course.

"Aggreko has vast experience of providing temporary power and temperature control solutions at golf tournaments,” said Angus Cockburn, interim CEO of Aggreko, which has its headquarters in nearby Glasgow.

“Doing so at The 2014 Ryder Cup, which is on our doorstep and is perhaps higher profile than any previous tournament is a great privilege.”

Other major sports events that Aggreko has provided services for include nine Olympic and Paralympic Games, five FIFA World Cups, four Ryder Cups in Europe and the XX Commonwealth Games.

"Aggreko is yet another global business with firm Scottish roots to join us at The 2014 Ryder Cup,” said Edward Kitson, match director of the 2014 Ryder Cup. “Their expertise and experience at previous sporting events, both at golf tournaments and others with international broadcast power requirements, will be invaluable.”