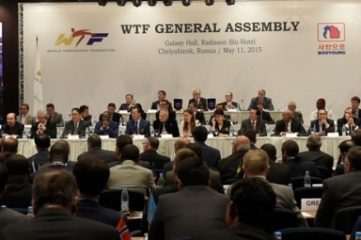 Wrestling and taekwondo are the latest Olympic sports to withdraw their membership of the SportAccord association, with taekwondo also pulling out of the World Combat Games

Wrestling and taekwondo and wrestling have joined five other Olympic sports in suspending their membership of SportAccord, amid tension between the umbrella organisation for sports federations and the International Olympic Committee (IOC).

Taekwondo has also pulled out of SportAccord's World Combat Games after a unanimous vote by the council of the World Taekwondo Federation (WTF).

“Taekwondo is more than a sport; it is a philosophy," said WTF president Chungwon Choue at the federation’s general assembly on Monday.

"It is a philosophy based on self-discipline, integrity and respect and at the WTF we believe we have an obligation to stay true to these values.

"It is with regret that taekwondo will not participate in the World Combat Games.

"However, we will continue to promote taekwondo and the Olympic values around the world and develop our sport for our athletes and our millions of fans worldwide.”

At the WTF assembly, IOC sports director Kit McConnell gave a presentation about Olympic Agenda 2020 and taekwondo within the Olympic Movement.

The Kosovo Taekwondo Federation was also granted full WTF membershipn at the assembly.

United Worldwide Wrestling (UWW), the international federation for wrestling, said it has also suspended its membership of SportAccord due to relations with the Association of Summer Olympic International Federations (ASOIF).

“Our decision, which is based on our full commitment to the Olympic Movement and its leadership, implies that for the time being, United World Wrestling shall refrain to participate in the activities and games organised by SportAccord, until the relations with ASOIF has improved to the latter’s satisfaction,” said UWW president Nenad Lalovic.

UWW and WTF join the international federations for archery, athletics, boxing, canoeing, shooting in withdrawing their membership of SportAccord in the current climate.

The moves follow SportAccord president Marius Vizer’s public criticism of the IOC at the SportAccord Convention.