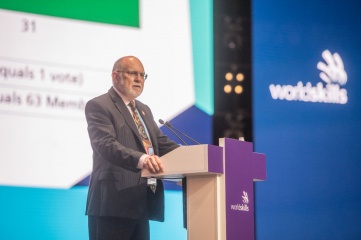 The WorldSkills Board has appointed Chris Humphries the Acting President and Chair of the Board, until the WorldSkills General Assembly in 2022.

[Source: WorldSkills] On Friday, 21 February 2020 the President and Chair of the Board of WorldSkills, Jos de Goey, suddenly passed away at the age of 56. His contribution to the development and promotion of skills and skills excellence in the Netherlands, Europe, and the across the world was huge. Following many years on the WorldSkills Board, Jos was elected WorldSkills President at the General Assembly in August of 2019.

The WorldSkills Constitution and Standing Orders lay out the procedure to be followed in the event of a casual vacancy in the post of President between scheduled elections. Accordingly, the Board appointed one of the Board members as Acting President until the next scheduled Presidential election date.

Chris Humphries has a long and distinguished record in the world of vocational training and skills. A highly experienced senior manager, chief executive and chair, he was chair of the UK government’s Skills Task Force for three years from 1998, also chairing several charitable NGOs with a particular focus on tertiary and higher education.

His final executive role was as the founding Chief Executive of the UK Commission for Employment and Skills, advising the four UK governments on policy and practice between 2007 and 2010. He joined the WorldSkills movement as the Chair of WorldSkills UK, and while in that position led the successful bid in 2006 for WorldSkills London 2011. As a WorldSkills Honorary Member, he was subsequently involved in the development of the Vision 2025 strategic plan.

“This is an incredible honour and I want to sincerely thank the Board for their vote of confidence in me today, and for their willingness to support me as Acting President of WorldSkills,” said Chris Humphries. “I was not elected as President by the General Assembly last August, Jos was, and he set out his aims and priorities in support of his agenda at that time. I look forward to working closely with all WorldSkills Members and partners to ensure our continued success, and to deliver the legacy Jos intended.”