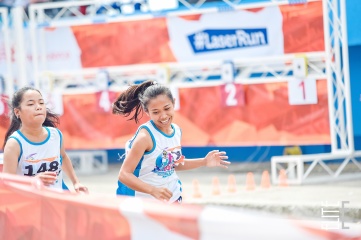 In its 70th year, UIPM looks to the future with a rebrand and the success of the Global Laser-Run City Tour

When the Union Internationale de Pentathlon Moderne (UIPM) was formed on August 3, 1948, the majority of events at the Summer Olympic Games were taking place some 50 kilometres away in London.

At the time, a meeting of 15 national pentathlon federations at the Royal Military Academy in Sandhurst may not have seemed like the epicentre of the action, but the decision taken by that group sowed the seeds of a sporting organism that has been growing and flourishing ever since.

Today, after 70 years of heritage and innovation, the UIPM movement is in many ways unrecognisable from those early beginnings.

Today it is a sprawling sporting organisation with nearly 120 member federations, a 106-year-old core Olympic sport (Modern Pentathlon), five other multi-discipline UIPM Sports and a new urban phenomenon that is rapidly spreading across the cities in all six of the world’s populated continents.

That phenomenon is the UIPM Global Laser-Run City Tour (GLRCT), a concept that delivers an exciting, dynamic and fun competition to participants of all ages and offers them an entry point to UIPM Sports. Who knows, maybe some of the young athletes enjoying the unique combination of running and laser shooting might even become pentathletes one day and reach the Olympic Games.

The GLRCT took place in parks, stadiums and iconic urban venues in 60 cities around the world in 2017. It is currently in the process of visiting about 100 cities throughout 2018.

Laser-Run is the newest sport on the UIPM pyramid. It was conceived as a development sport, aimed at growing participation numbers in the core Olympic sport of Modern Pentathlon, but its simplicity, popularity and marketability have seen it grow an identify of its own.

The growth of that brand has coincided with the evolution of UIPM’s wider visual identity, which aims to communicate the historic pentathlon family values aligned to the dynamic future of UIPM Sports.

A branding review in 2017 led to the creation of two new logos, one for institutional and internal use and the other for external promotional use. The new institutional logo features two original colours that represent the pentathlon environment: yellow (symbolizing dynamic development) and blue (standing for longevity and power). Gender equality is also reflected with the addition of two female pictograms.

Martin Dawe, UIPM Executive Board Member for Marketing, said: “The purpose of this branding review is to make sure our logos are more up to date. It is not a completely new logo but more of an evolution, and it’s about making it more applicable for today’s audience.”

UIPM has planned a series of events and commemorations in celebration of its 70th anniversary, culminating with a special edition of the UIPM Congress in November in Limassol, Cyprus, which will feature a gala dinner with VIP guests from across the Olympic movement.

The role played by those 15 federation delegates in England in 1948 will be fully acknowledged, as well as the work of the many people who have contributed across the past seven decades to the realisation of a dream.