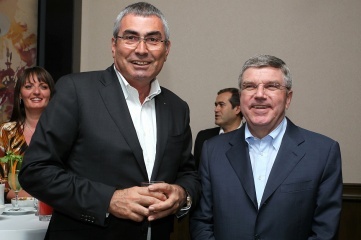 The International Olympic Committee has elected to change the composition of its Executive Board, promoting Prof. Uğur Erdener and Juan Antonio Samaranch to Vice Presidents.
Three new Executive Board members have been elected in  Gian Franco Kasper (SUI), Angela Ruggiero (USA) and Ser Miang Ng (SIN).

Sir Craig Reedie and Uğur Erdener are both set to speak at Host City 2016 alongside several other key figures from the Olympic Movement and the wider event hosting world.
A Professor of Ophthalmology, Uğur Erdener is the President of the Turkish National Olympic Committee, President of World Archery and Chair of the IOC Medical and Scientific Commission.
“I am honoured to have been elected to the position of IOC Vice President,” said Prof Dr Erdener.

“The principles of Olympism are ever-more relevant in the modern world, and I am committed to supporting the goal of the IOC in building a peaceful and better world through sport.”
Prof Dr Erdener is the second World Archery President to have become an IOC Vice President. Jim Easton served in the role from 2002 to 2006.

Juan Antonio Samaranch is Vice President of the UIPM and Chair of the Board of directors of Olympic Channel Services. His father, of the same name, was IOC President from 1980 to 2001.
The changes to the Executive Board see the departure of René Fasel, Claudia Bokel, Anita Defrantz and Gunilla Lindberg.

Ching-Kuo Wu and Patrick Hickey are resuming their seats as representatives of the Association of Summer Olympic International Federations (ASOIF) and the Association of National Olympic Committees (ANOC) respectively. Also remaining on the Executive Board are Sergey Bubka and Willi Kaltschmitt.

“René’s leadership has been inspiring, and I hope I can represent hockey with the same pride now that he is leaving,” she said.

These changes, as well as the election of eight new IOC members, were confirmed at the IOC Executive Board meeting at the outset of the Rio 2016 Olympic Games. The newly composed Executive Board will begin its work after the Games.