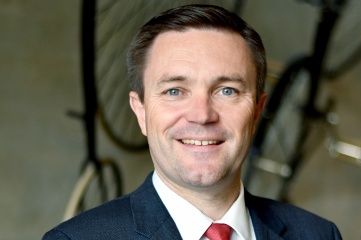 Host City: What are your expectations of Host City 2019 and its theme of “Innovate, Reformulate, Co-Create”?

David Lappartient: For an International Federation such as ours, with its extremely varied and packed international calendar, Host City provides a meeting place where the organisers of major events and host cities, regions, and countries can come together. We are delighted to be playing a part this year, alongside the EBU.

The theme of this year’s event,"Innovate, Reformulate, Co-Create", ties in perfectly with our philosophy. In line with our strategic roadmap, Agenda 2022, we are striving to increase the appeal of our sport, which could well involve changing or launching new formats. As well as better meeting the expectations of broadcasters and the public, these formats can, as part of our activities, more effectively respond to today’s key social issues, such as the promotion of gender equality, and make a contribution to a sustainable future.

Host City: What is the rationale and inspiration behind combining all the different cycling disciplines in one single UCI Cycling World Championships that will be hosted for the first time in Scotland in 2023?

David Lappartient: We want to bring all our best athletes together for a single event held at one venue every four years, in the year before the Olympics: the UCI Cycling World Championships, which will celebrate virtually all of our disciplines.

In 2023, more than 2,600 cyclists in 13 disciplines and representing 120 countries will fight it out for the legendary rainbow jersey. It will be an amazing sporting event for the athletes and a memorable festival of cycling for the people of Glasgow and Scotland and for visitors.

Host City: How important was partnership work in creating this new event? Who were the main players involved and how did you work together to achieve this outcome?

David Lappartient: There is no question that this mega event, which is without precedent in the history of our sport, presents us with a massive yet exciting challenge. The competitions will take place at venues both inside and outside the city, indoors and outdoors, including roads, which involves managing traffic.

And when it comes to hosting the athletes, national delegations, TV crews, media and the fans, it takes a great deal of coordination and a close partnership between the stakeholders – the UCI, the organisers, the host broadcaster, the local and national authorities, and many others besides.

Therefore, the expertise available amongst all the host partners in delivering major events of this nature was extremely attractive to the UCI as the event owner.  The leadership of the Scottish Government and their attitude to being innovative and willingness to take on the challenge of the first edition of a new event has been vital to the success of the project.

Host City: We have seen how hosting major cycling events has driven a surge in participation in the sport in Yorkshire. Do you anticipate similar increase in Scotland following the championships there?

David Lappartient: Absolutely. Scotland is a hotbed of cycling that has produced some great champions. The likes of Graeme Obree, David Millar, Chris Hoy, Craig Maclean (now a coach at the UCI World Cycling Centre), Callum Skinner, Katie Archibald and her team pursuit colleague Neah Evans, Jack Carlin and Neil Flachie have all made history in our sport.

Glasgow, which is a regular destination for the UCI Track World Cup, receives regular praise for actively promoting elite cycling and cycling for all. In recognition of that and the work it does to encourage people of all ages to get out and ride, we awarded it the UCI Bike City Label in 2019. Our mega event will allow Glasgow and Scotland to move to the next level in the development of cycling as a means of transport, a health-enhancing activity, and a leisure pursuit.

Host City: There is a very interesting partnership between the UCI and Zwift, who are mapping UCI events onto their active esports platform. Can you tell me a bit about the benefits of this partnership to the UCI?

David Lappartient: Cycling Esports presents a wonderful opportunity to develop cycling. It is a new way of practising our fast-growing sport that enables more athletes of all levels to train and take part in competitions, regardless of the weather outside and where they live. It is also an engaging way of improving people’s health by encouraging them to cycle indoors whatever their surroundings, such as urban environments or areas where people cannot cycle due to the terrain.

In teaming up with Zwift, our Federation can reach out to a new and fast-growing community and increase the appeal of our sport by bringing this new discipline into the fold. In the meantime, it can also bring in the necessary safeguards to ensure that competitions are founded on integrity and credibility.