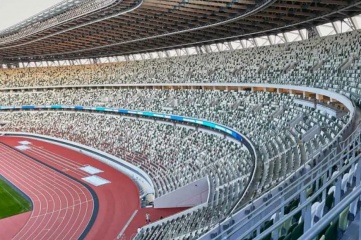 The Olympic Stadium, Tokyo will have no fans in the stands during the Games (Photo: IOC)

The hosts and organisers of the Tokyo 2020 Olympic Games have banned audiences from venues.

The decision followed an announcement of a state of emergency in Tokyo by the Government of Japan until 22 August, amid a surge in cases of the highly contagious Delta variant of Covid-19.

The Olympic Games take place from July 23 to August 8.

In a joint statement, the International Olympic Committee (IOC), the International Paralympic Committee (IPC), the Tokyo 2020 Organising Committee, the Tokyo Metropolitan Government (TMG) and the Government of Japan (GoJ) said: “The state of emergency in Tokyo is being implemented as a measure aimed at suppressing the flow of people in order to prevent the spread of infection now, because the number of confirmed COVID-19 cases remains high and the number of people infected with variant COVID-19 strains in Tokyo is increasing.

“In response to the state of emergency, stricter measures with regard to the Olympic Games Tokyo 2020 have also been decided by the three Japanese parties. No spectators will be allowed into any venues in Tokyo during the Olympic Games. Under this policy, in areas where emergency measures are not in force, local government authorities will meet and decide specific measures in consultation with the local governors based on the situation in each area.”

The dramatic move follows a meeting of these five parties on 21 June 2021, the conclusions of which included: “In the event that a state of emergency or other priority measures aimed at preventing infection are implemented at any time after 12 July 2021, restrictions on spectator numbers at the Games, including non-spectator competitions, will be based on the content of the state of emergency or other relevant measures in force at that time.”

The hosts’ and organisers’ decision to exclude fans from venues is backed by the rights holders, the IOC and IPC. “The IOC and the IPC were informed by the Japanese side about the impact of this announcement on the Olympic and Paralympic Games Tokyo 2020 and supported the policies that were presented by the Japanese parties,” the joint statement said.

“The IOC and IPC, respecting this decision, support it in the interest of safe and secure Games for everybody.

“At the same time, all five parties deeply regret for the athletes and for the spectators that this measure had to be put in place for the reasons outlined above.”

The Tokyo 2020 organising committee had originally been planning on generating US$800 million from ticketing revenues.

Although people won't be watching in the venues, Tokyo 2020 is set to reach a bigger audience than ever through a greatly enhanced digital reach.

Tokyo 2020 president Seiko Hashimoto said: "It is regrettable that we are delivering the Games in a very limited format, facing the spread of coronavirus infections.

"I am sorry for those who purchased tickets.

"Many of the Japanese public were worried about the Covid-19 situation, even with the solid countermeasures, because of the flow of people and because of various concerns.

"The anxiety is being expressed and a lot of people are opposed. Every person is entitled to have every different thought but overriding these differences, athletes will do their best.”

The decision to keep fans out of venues is not irrevocable: “In the event of a significant change in the state of infection, a Five-Party Meeting will be convened immediately to review the spectator capacity,” the statement said.

However, with the state of emergency set to continue until 22 August, it is unlikely that any audiences will be able to attend the Olympic Games.

The policy for the Paralympic Games was due to be decided on 16 July, one week before the Opening Ceremony of the Olympic Games. But now, “the decision regarding the admission of Paralympic event spectators will now be taken when the Olympic Games end,” based on the infection situation at the time.