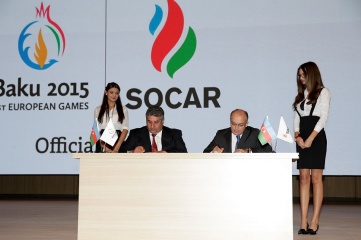 The State Oil Company of the Republic of Azerbaijan (SOCAR) has joined Proctor and Gamble, Tissot, BP and Nar Mobile as the fifth official partner of the Baku 2015 European Games.

The deal will see Baku 2015 European Games branding on every SOCAR forecourt and outlet across the country to raise awareness of the event.

“The majority of tickets will go to local people; that’s a big challenge,” said Charlie Wijeratna, commercial director at Baku 2015 in an exclusive interview that will be published in the autumn issue of HOST CITY magazine.

SOCAR, which employs more than 60,000 people, will also help to promote the Games through a marketing campaign in four other European countries, including Switzerland, Georgia, Romania and Ukraine.

Azad Rahimov, Azerbaijan’s Minister of Youth and Sports and CEO of Baku 2015, said “The European Games is an opportunity to promote Azerbaijan to the rest of the world and to have the backing of such a highly valued international company is of vital importance.”

SOCAR have a long standing association with major sporting bodies and events, including the Association of Football Federations of Azerbaijan. It is also sponsoring the 2016 UEFA European Football Championship in France.

Mr Rovnag Abdullayev, President of SOCAR, said “Sponsorships across sport are a very significant point for us, and SOCAR is honoured to be associated with such an exciting moment in the history of the country.”

“As we continue to count down the days until the beginning of the European Games, it gives us great confidence to know that many major Azerbaijani businesses are backing our efforts to create an innovative event that will unite Europe through sport,” said Simon Clegg, Chief Operating Officer of Baku 2015.

“We are very pleased with how the sponsorship programme has gone,” Wijeratna told HOST CITY.