Home
»
News
»
EXCLUSIVE: Santiago gets to work on the 2023 Pan American Games 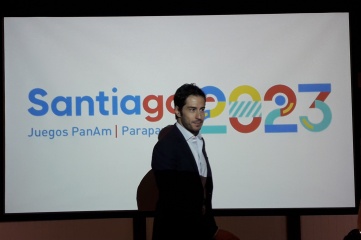 Eduardo Della Maggiora, CEO of the Organising Committee of the Santiago 2023 Pan American Games, spoke with Host City at the MEI Summit at a seminal moment for the country

Host City: How would you describe Santiago’s journey towards hosting the Games?

Eduardo Della Maggiora: Santiago has been highlighted in Latin America for its good quality of life, safety, connectivity and most recently was ranked as the most technological city in Latin America. Chile is a country that has been growing very rapidly in the previous decades, and has a very open economy, with Free Trade Agreements with more than 60 countries worldwide. The country is generally recognized as one of the most developed and stable economies in Latin America.

The sports community has been growing very quickly as well, with notable international results like becoming Copa America Champions two years in a row and two Olympic gold medals in Tennis. Hosting the Pan American Games was going to happen eventually.

Host City: What were the decisive factors in being awarded the Games?

Eduardo Della Maggiora: Political stability, economic stability and already existing sport infrastructure where probably at the top of this list. The country’s love for sports, and everything sports represents, was also probably very high.

Santiago’s connectivity is also a big positive for athletes and visitors of the games; close to 70 per cent of disciplines will take place in five main venues, including where the athletes’ village will be, which are very well connected to public transportation buses and subway.

Host City: How much new infrastructure do you need to build?

Eduardo Della Maggiora: There isn’t very much new infrastructure that we need to build, if you compare Santiago 2023 with Lima 2019 for example, which is hosting the Games this year, because we have many venues which are a legacy of the Santiago 2014 South American Games.

New infrastructure that has been announced are a new Hockey fields and a new Paralympic pavilion. The athlete’s village in Ciudad Parque Bicentanario is the largest and most urgent infrastructure project to be started. The project will be 100 per cent privately funded. The Ministry of Housing is in charge of leading the public tendering process, which should kick-off in the coming months.

So, the existing infrastructure is a very good starting point, but some investment will be needed to prepare the city for the Games four years down the road.

Host City: What is public support like for the Games?

Eduardo Della Maggiora: Public support– starting from President of Chile – is very high. Everyone is very eager to make it happen as the country has never hosted an event of this magnitude. The Santiago 2014 South American Games were already a big party in the city and country – with full stadiums and lots of interest from the community – which showed the city and country’s interest in these type of sporting events. Santiago 2023 will be the biggest sporting event in our county’s history and Chileans are ready to participate in one way or another .

In November Santiago is hosting the COP 25 Climate Change Conference – this is the biggest event we’ve done in a while and will be a good opportunity to learn how an event of this magnitude works in Chile.

Host City: Are the opportunities mainly for local or international suppliers?

Eduardo Della Maggiora: We want to help the local community and thousands of local businesses – but also invite international suppliers. We haven’t hosted an event of this magnitude in the past and there’s a lot of expertise we will need to import. We want to learn from that.

This is basically the planning stage, making sure we have the right team and people, that the stadiums and the baseline is compliant with Pan American Games standards, and start working on Gantt chart from today until October 2023 and make sure it happens in the best and most seamless way.

We are assessing what needs to be done in next four years. Right now we are working on branding, mission and values. We are also reviewing the sports programme, speaking to potential sponsors and starting to work on our legacy programme.

Host City: How are sponsors engaging with your legacy programme?

Eduardo Della Maggiora: Chile has the sixth highest incidence of childhood obesity in the world – and the highest in Latin America. Improving these figures is an important part of the legacy programme.

We want to tailor the experiences of sponsors in a way that helps them connect with consumers in a very different way, but at the same time positively impacts the lives of millions of Chileans through  sports, volunteering and legacy programmes.