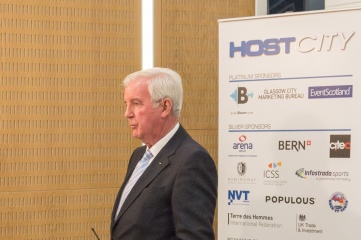 In this statement, WADA clarifies the timing of McLaren Investigation Report and states facts related to investigations into Russian matters

The World Anti-Doping Agency (WADA) has taken note of the views expressed by some concerning the timing of publication of the Agency’s independent McLaren Investigation Report, which was published by Professor Richard H. McLaren on 18 July, exposing Russian State manipulation of the doping control process; and, the Agency’s subsequent recommendations – both that led to the International Olympic Committee’s (IOC) decision of 24 July.
WADA understands that the timing of the McLaren Investigation Report has been destabilizing for a number of organizations as they prepare for the Rio Olympic and Paralympic Games. However, WADA wishes to factually clarify that the Agency acted immediately on allegations concerning Russia when it had corroborated evidence and the power to do so under the World Anti-Doping Code (Code).
When German-based ARD released their first documentary in December 2014 that contained corroborated evidence, WADA quickly initiated its Independent Commission. The Commission, which was chaired by Richard W. Pound, commenced its investigation in January 2015 when WADA acquired its new powers of investigation under the 2015 Code.
“While our Independent Commission’s Report suggested that doping in Russia was likely not restricted to athletics, and that the Russian secret services (FSB) were present within the Sochi and Moscow laboratories, the Commission did not uncover concrete evidence to the effect that the Russian state was manipulating the doping control process,” said Richard W. Pound. “The Pound Commission leveraged all information that the whistleblowers had provided; and yet, there was no concrete evidence to support State manipulation.”
On 9 November 2015, the Pound Commission reported and exposed wide-spread doping in Russian athletics; and, on 10 November 2015, WADA took quick and decisive action on the Commission’s recommendations.
“It was only when CBS 60 Minutes and the New York Times, on 8 and 12 May 2016 respectively, published the allegations from the former director of the Moscow and Sochi laboratories, Dr. Grigory Rodchenkov, that WADA had concrete evidence suggesting Russian state involvement that could be investigated by initiating the McLaren Investigation, which we did immediately,” said Craig Reedie, WADA President. “This decision was endorsed by WADA’s Executive Committee and WADA’s Athlete Committee,” he continued. “It must be understood that Dr. Rodchenkov was heard several times by the Pound Commission in 2015; and that, he never provided the information that he later revealed to the New York Times in May 2016. This information was subsequently corroborated by the McLaren Investigation, which also unveiled a wider implication of the Moscow laboratory.”
“WADA’s Executive Committee – composed in equal parts by representatives of the Olympic Movement and Governments of the world – supported Professor McLaren’s independent mandate, which was to obtain evidence as quickly as possible in the interest of clean athletes,” said Reedie. “While it is destabilizing in the lead up to the Games, it is obvious, given the seriousness of the revelations that he uncovered, that they had to be published and acted upon without delay.”
“Further to the International Olympic Committee’s criteria being outlined on 24 July, WADA has facilitated the transfer of relevant information that is available to date, concerning individual athletes, from the McLaren Investigation team to International Federations,” said Olivier Niggli, Director General, WADA. “It should be noted however that Professor McLaren’s focus thus far was on establishing involvement of the Russian State and not regarding individual athletes that may have benefitted,” Niggli continued. “WADA will continue supporting anti-doping organizations by providing information as and when it becomes available via McLaren’s ongoing Investigation.”
As it relates to WADA’s process of accreditation and proficiency testing of anti-doping laboratories, it focuses on the technical abilities of laboratories. In the case of the Moscow laboratory, WADA suspended the laboratory in 2015 as soon as breaches were identified via the Pound Commission. Addressing corruption within the anti-doping system – including state or secret service interference in laboratory operations – will be one of the topics discussed during the first in a series of multi-stakeholder Think Tanks that WADA will hold in September 2016.