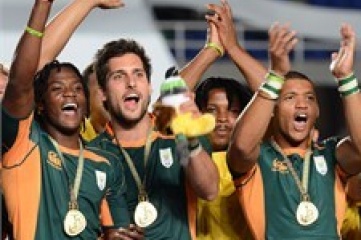 Rugby Sevens was the most widely attended sport at the World Games, a fitting swansong as it progresses to the Olympic Games

The organisers of last year’s World Games, which was held in the Colombian city of Cali, have announced that Rugby Sevens was the event’s most popular sport.

The news is a boost to Rugby Sevens as it prepares to feature in the Olympic Games for Rio 2016 and Tokyo 2020.

Cali 2013 was Rugby Sevens’ fourth and final appearance in the World Games. The multi-sport event, held in each year that follows the Summer Olympic Games, includes sports that are not currently on the Olympic Programme.

The largest attendance out of all the sports events was recorded at the final of the Rugby Sevens tournament. 17,950 fans went to the Pascual Guerrero Stadium to watch South Africa and Argentina compete on 2 August.

IRB Chairman Bernard Lapasset said: “Rugby is excited to be at the top of this list and we are proud that we helped to make the World Games such a popular success.

“As we prepare to introduce Sevens to the Olympic Games summer programme at Rio de Janeiro in 2016, it is encouraging for us that we are proving to be a hit at other multi-sport events, especially given this was also in South America.”

South America is an important growth market for rugby.

The largest crowds of all were recorded for the flagship non-sports events, the opening and closing ceremonies, which each attracted 31,000 spectators.

A total of 408,198 tickets were sold for World Games events, with crowds averaging 76 per cent of venue capacity. The majority of events were virtually sold out, with 64 out of a total 106 events selling more than 97 per cent of tickets.

The next World Games takes place in the Polish city of Wroclaw in 2017.