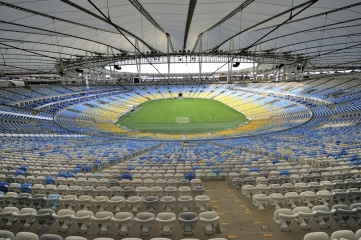 The Maracana will host athletics events at Rio 2016

The organisers of the Rio 2016 Olympics have confirmed that more than half of the tickets available for the summer Games will be priced at less than R70 (€24/$31).

Rio 2016 said that the strategy would allow the event to be “open to everyone”, with a total of 7.5 million tickets set to go on sale covering 717 different competition sessions in 28 sports, as well as the opening and closing ceremonies.

About 3.8 million tickets will be priced at R70 or less, with the cheapest ticket costing R40.

Opening ceremony tickets will cost between R200 and R4,600.

The full ticketing programme will be disclosed alongside the competition schedule in November, when fans will be able to register their interest in particular sports and receive tailored news updates via email.

The company has previous Olympic experience having served the 2006 and 2014 winter Games, in Turin, Italy and Sochi, Russia, respectively.

Eventim said: “In its partnership with Rio 2016, Eventim will continue to contribute to the Olympic and Paralympic movement by providing a robust, state-of-the-art ticketing platform, building on those which have been delivered for Torino 2006 and Sochi 2014 and embracing technological and operational know-how.”