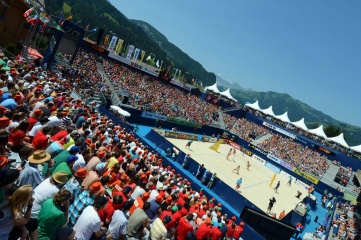 The FIVB has partnered with Red Bull to give beach volleyball a lift as Rio 2016 approaches, with Swatch renewing sponsorship of flagship events

The International Volleyball Federation (FIVB) today announced a partnership with the Beach Major Company to assist with running and promoting FIVB World Tour events including the Season Final and the Major Series.

Swatch also today renewed its sponsorship of these events.

The Beach Major Company is a joint venture between Red Bull and Hannes Jagerhofer, founder of ACTS Group, who have been cooperating closely for 20 years.

Soft drinks manufacturer Red Bull, with its slogan “Red Bull gives you wings” has emerged in recent years as a major player in event management and marketing. Jagerhofer has promoted and staged many volleyball events.

“This new partnership is the next step in the FIVB’s mission to ensure that volleyball is the world’s leading family sport entertainment through engagement, innovation and universality,” said Dr Ary S. Graça, president of the FIVB.

“Like the FIVB and volleyball, Red Bull is a dynamic, global brand and I look forward to working together to ensure that the FIVB’s beach volleyball events are a memorable spectacle for fans around the world.

“Red Bull is unrivalled in its marketing expertise. In combination with the Red Bull Media House with its outstanding network and knowledge of content production and distribution – this makes them an ideal partner for the FIVB. We are also delighted to be working closely with Hannes Jagerhofer – a renowned promoter who has set the benchmark for staging world-class volleyball events for many years.

“Finally, today we are announcing the renewal of the relationship between beach volleyball and one of the most respected sponsors in sport – Swatch. These are all incredibly prestigious partners for the FIVB and I look forward to working closely together to ensure that volleyball continues to lead through innovation as the number one family sport entertainment in the world.”

The joint venture has committed to “long term backing” of the FIVB and is expected to significantly expand the Major Series, which has three events in 2015: Porec, Croatia; Stavanger, Norway and Gstaad, Switzerland.

"The Swatch Beach Volleyball Major Series, together with the FIVB as the world governing body, was created to push beach volleyball to an entirely new level and position it on the world's stage of top global sports,” said Hannes Jagerhofer, CEO of the Beach Major Company.

“Only with the strong support of the International Federation, which is entirely responsible for the sport’s progress, is it possible to realise the vision of the Major Series.

“Bringing Swatch on board as title sponsor, which is not only a strong global iconic brand but also a year-long trusted partner, facilitator and driving force, is the best possible scenario for a new era in beach volleyball history.

2015 promises to be a high profile year for the sport, with the 2015 FIVB World Tour marking the start of the second qualification process – alongside the Continental Cup – for the Rio 2016 Olympic Games.

Hosted on the iconic Copacabana Beach, beach volleyball is set to be the signature event of Rio 2016.