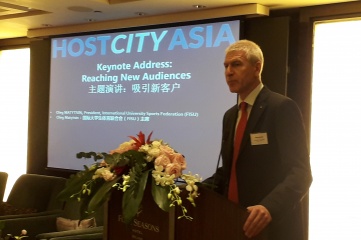 In this keynote speech, Oleg Matytsin, President of FISU addressed the conference theme of "Reaching New Audiences" at Host City Asia in Beijing

FISU is the IOC-recognised partner of the Olympic Movement responsible for delivering international sport to millions of students from more than 26,000 campuses around the world, with the help of member federations in 174 countries.

Our vision is to help shape the leaders of tomorrow through their experiences of international university sport: either as spectators, as volunteers or as spectators. And the nature of University life is that every four years or so, our audience is completely new.

In fact, the sports world often thinks of new audiences as only being those in new places, perhaps where a rights holder has not yet hosted competitions. But I would challenge this approach.

New audiences must also be thought of as those young people who, each year, are arriving at the age where they will make decisions for themselves, where they will develop affinities and loyalties independently. These people are not just the future of one sport, or two sports, but the future of every sport. And every year, the universities of the world have an intake of potential players and potential fans that is measured in the millions.

FISU’s showcase events, the ones where we reach the biggest number of students each year, are the Winter and Summer Universiades. And the most recent editions of these were here in Asia: last year we were in Almaty for winter and Taipei for summer.

In the last ten years, there has been a lot of talk about opening up new audiences in Asia and especially here in China.

I am proud to say that FISU has been at the front of successful hosting in Asia for twenty years. Many of our friends here are already old friends. Years before even Beijing’s Olympic bid was successful, FISU was here preparing for the Beijing 2001 Universiade: the first major global multisport Games in China.

Even if China and Asia are not new audiences for us, they are very successful audiences and we are always happy to come back and even to discover new cities!

Our lessons in developing new audiences here have been very valuable to us. For FISU, our work here in China and in Asia has been about long-term investment. And our biggest investment is the one we make in people.

I cannot understate how important it is to invest time in building relationships and developing people. That’s why things like volunteer training are so important to us at FISU. Ten, twenty or even thirty years from now, there will be a student whose experience of volunteering at one of our events led to a career as a leader in business or in politics. And that student will remember just how much hosting one of our events can do for people and communities.

Of course, it is no longer possible just to use a single tool to reach audiences, whether new or old. Today’s audiences are more fragmented than ever. Advertisers know this very well. They used to be able to count on TV to reach the big majority of their audiences. But now they have to combine efforts across many different channels. They have to follow closely the interests of their audiences and we do the same with our World University Championships. These FISU events, and we will have organised more than 350 of them by the end of this year, can be a perfect vehicle for new sports to develop and find new audiences of their own.

A perfect example is the World University American Football Championship that will bring something new to the nearly 20,000 students who attend Harbin University of Commerce next month. Taking those 20,000 students to experience a new sport and new cultures would not be affordable. But taking a new sport and new cultures to the students in Harbin who are expecting international careers can be a huge part of their education.

I would like to say that hosting events here in China has been a vital part of the way FISU is working on new ways to deliver international University sport, and to bring it to new audiences.

The World University League for 3x3 basketball that has been hosted annually by Huaqiao University is a great example of this.

3x3 basketball has been a great success, especially in Asia. It was first trialled in Macao, it first came to global attention at the Singapore Youth Olympic Games and the first Olympic champions will be crowned in Tokyo.

For us, 3x3 has been an opportunity to bring in not just a new sport but to adapt the model of international university competition.

Traditionally, teams have competed on behalf of their national university sports federations.

Now, however, we are providing opportunities for teams to compete on behalf of their individual universities.

Today’s young people seem to identify less and less with nationalism. Instead they appear to engage more with brands.

So at a time when universities have been looking to establish themselves as global brands, it has made a lot of sense to allow athletes to compete with the names of their universities on their shirts whether they are playing new sports or traditional sports.

We can already see this with eSports too. In 2014, Robert Morris university, not far from Chicago, became the first university to offer scholarships to players of League of Legends.

It is here in Asia that we have discovered new audiences for more traditional sports too, and I would encourage all rights holders to show some flexibility out of respect for their hosts. This approach certainly worked for us last year, when we added rollersports to the programme for the Universiade.

While bringing new sports and events to new athletes and new hosts, we’ve also been looking of course at new ways to bring our events to new audiences.

Everyone in this room will be aware of the changes in the way young people consume sport.

While live TV continues to be very important, there are so many new ways to reach audiences. It is critical to take advantage of them.

Digital streaming is something I know the panellists in the next discussion will want to talk about.

But to give you some examples, FISU has found huge success in streaming competitions online via social media. For us, to have more than 100,000 watching a single game of basketball online is a great step forward.

This year’s 3x3 World University League finals is one where we will be developing this approach further, with our own production teams and online broadcasting.

And as of next year, FISU will be looking to apply all that it has learned about engaging students as players, as volunteers and as fans at the first FISU University World Cup Football, which will take place in September in Jinjiang.

The FISU University World Cup Football hosting arrangement is potentially for seven annual editions, which shows this kind of long-term investment FISU is prepared to make in places and people. And I should add that we are always looking for new hosts in which to invest, new places where we can engage students around both traditional and new sports.

It is clear there is a great opportunity for the old and the new to learn from each other. And what better place to do this than in a place that combines tradition and innovation as well as China!