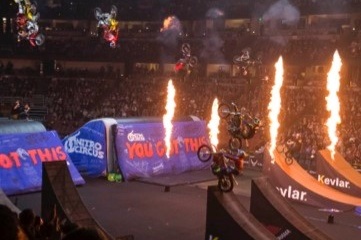 Host City attendees invited to experience spectacular You Got This show, coming to Glasgow’s SSE Hydro on 21 November. Go behind the scenes and meet action sports icon Travis Pastrana and other Nitro Circus stars during pre-show VIP tour

(Los Angeles, CA USA)  Following a packed September, which saw the debuts of both the You Got This world tour as well as the Nitro Rallycross competition, Nitro Circus is getting ready to heat up European arenas this winter. Now, with You Got This coming to Glasgow’s SSE Hydro on 21 November, Nitro Circus President Andy Edwards and other company executives will appear at Host City 2018 to detail the youth entertainment brand’s transformative year and its exciting plans for 2019.

To close out the event in high-adrenaline style, Nitro Circus and Host City invite conference attendees to the 21 November You Got This show at the SSE Hydro, as well as take a behind-the-scenes look at the stunt spectacular reviewers are calling, “a must see.” Meet action sports icon and Nitro Circus co-founder Travis Pastrana as well as other Nitro Circus stars. The VIP tour begins at 6:00 PM with the show starting at 7:30 PM.  For more information and to RSVP go here (deadline to RSVP is Monday 19, November)

With the all-new You Got This tour, Travis Pastrana debuts as executive producer for the greatest, craziest, funniest show in Nitro Circus history. You Got This features multiple X Games medalists and several Nitro World Games champions attempting never before seen feats on a huge stage set. The new 17-metre tall Giganta ramp, incorporating a takeoff kicker that is three metres taller than anything Nitro Circus has toured before, launches BMX, Skate and Scooter athletes five stories into the air. “The tricks are getting out of hand,” Travis Pastrana reports. “The guys are throwing like nothing on this new ramp!”

Pastrana himself also leads an all-star roster of Freestyle Motocross riders who send it with jaw-dropping new tricks, and both sides will battle it out in FMX and Giganta competitions, both for prize money and - even more importantly - bragging rights. Look out for new crazy contraptions, too; who thought that a jet ski should fly? Without a doubt You Got This is totally wide open, with more thrills, more excitement and more irreverence than ever before. For a preview of the thrills Nitro Circus: You Got This has in store for Glasgow fans, go here.

Nitro Circus, the world’s biggest action sports entertainment brand, creates electrifying live events and unbelievable original content that at once exhilarates, captivates and inspires thrill-seeking fans worldwide.  Co-founded by global superstar Travis Pastrana in 2003, Nitro Circus has since grown into a multiplatform phenomenon producing hit television shows, critically acclaimed documentaries and innovative digital offerings. That success gave rise to the Nitro Circus Live tour. Created in 2010, Nitro Circus Live has travelled the globe, playing to sold-out stadiums on five continents. The company introduced an innovative breakthrough in 2016 with the debut of Nitro World Games, completely rebooting action sports competition in the process. With over three million tickets sold to date, television programming that has aired in over 60 countries, more than 20 million engaged fans across its social media platforms and a burgeoning consumer products business, Nitro Circus is at the forefront of action sports and entertainment. For more information visit www.nitrocircus.com.

Host City Conference & Exhibition evolved from the network that grew out of the HOST City magazine, which is read by event owners, organising committees, cities and suppliers worldwide in their quest to host successful major sports, business and cultural events. It became clear that there was a need for an event that brings Cities, Rights Holders and Suppliers together to learn from each other's experiences of hosting sports, business and cultural events.

The inaugural Host City conference took place in London in 2014. A year later the event had doubled in size and grown to incorporate an Exhibition alongside the conference programme. The 2015 event was hailed as a big success and gained the support of leading industry figures across the board, including organisations such as the International Olympic Committee, the Commonwealth Games Federation, FIFA, International Federations, Capitals of Culture and World Expos.

2018 sees Host City returning to Glasgow for another year of growth where we will be welcoming attendees from cities and destination marketing organisations, cross-sector rights holders and suppliers from across the world. Host City is a Cavendish Group brand.

Register for Host City 2018 here to qualify for your VIP Nitro Circus experience.

About the Cavendish Group: