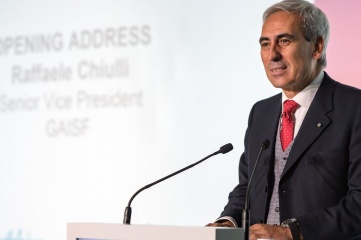 “The success of SportAccord 2019 proves the importance and commitment of our organisation to our stakeholders and members, delegates, exhibitors and partners involved in the sport landscape. SportAccord will continue to adapt to the needs of our delegates and provide a platform that allows us to gather and move forward on the activities and collaborations crucial to the development of our sports, athletes and fans, ensuring a voice for everyone.”

Held in the Oceania region for the first time, SportAccord 2019 followed hot on the heels of the XXI Commonwealth Games in the Gold Coast – billed as the Games of Firsts.

The SportAccord Review magazine looks back at some of the many highlights that took place across the event.

Delegates were treated to a traditional Aussie welcome when SportAccord 2019 was officially launched with an Opening Ceremony welcoming a global gathering to include: 1700 delegates from 830+ organisations, including 109 international sports federations, 176 cities and regions, and over 80 nationalities present.

At the annual General Assembly Raffaele Chiulli was unanimously elected as President of the Global Association of International Sports Federations (GAISF) at SportAccord. President Chiulli’s ‘Work Programme’ for GAISF comprises 4 pillars, aimed at addressing the needs of its members and the wider sports movement, and building on the services it offers.

H. E. Ban Ki-moon, 8th Secretary General of the United Nations, Chairman of the IOC Ethics Commission and Honorary President of 2019 Chungju World Martial Arts Masterships, delivered the Welcome Address at the SportAccord Summit conference, and highlighted the ‘transformative power of sport’ as well as the importance of big data and analytics. Commenting to The Daily, Mr Ban said: “SportAccord can play an important role in solving the problems and developing and promoting a sporting community through Conferences, Summits, Sports Festivals and other events, helping to disseminate the values of sport and a healthy community to people worldwide.”

The SportAccord Summit theme focused on ‘The Future of Big Data and Analytics’ with technology and learning being the key focus this year. Delegates heard how technology can influence ‘the spirit of sport’, and IFs were encouraged to forge brand partnerships and collaborate on big data, this being instrumental in helping to drive fan engagement.

Following its debut in Bangkok, the 3-day SportAccord United Through Sports Festival took place in Kurrawa Park in the Gold Coast, and enabled 5,000 children to try around 60 different sports with federations. The United Through Sports Youth Conference highlighted the need to continue to build on the outstanding legacy from Bangkok, with several projects being identified during the SportAccord Sports Festival in the Gold Coast.

The SportAccord event platform was used by World Lacrosse, the global governing body, to unveil its new name, logo and brand. Other exclusives at SportAccord came from: UK Sport confirming London will host the World Skate Street League Skateboarding World Championships and Birmingham will host The World Trampoline Championships in 2023; Gracenote offered its first look at the virtual medal table forecast for Tokyo 2020; and the Commonwealth Games Federation returned to meet representatives from the 2018 Games, to continue to learn from their experiences, in preparation for the best possible Games for Birmingham and the West Midlands.

The organisers of the Gold Coast’s biennial Pan Pacific Masters Games used the SportAccord platform to sign a Memorandum of Understanding (MoU) with the team behind the Kansai 2021 World Masters Games in Japan.

The World Academy of Sport released research findings on the challenges for student-athletes maintaining a dual career; and the International University Sports Federation (FISU) and the International Powerlifting Federation (IPF) announced Moscow will host the first University World Powerlifting Championship. IPF also attracted many delegates to their exhibition stand to test their strength, including IF Presidents and dignitaries including H. E. Ban Ki-moon.

At the International World Games Association’s (IWGA) General Assembly during SportAccord, the Chinese city of Chengdu was confirmed as host of The World Games 2025. “By signing a contract with one of the most forward-looking and dynamic cities in China, we have signalled our arrival as a major power in international sport,” IWGA President José Perurena told The Daily.

At other General Assemblies, AIOWF praised the 2026 presentations given by both city candidates, Stockholm-Åre (Sweden) and Milan-Cortina (Italy) via video at SportAccord 2019, and acknowledged the progress being made for the 2022 Olympic Winter Games in Beijing.

ASOIF took the opportunity to discuss their recently published report, ‘Vision for the Future of Sports 2019 to 2040’, which sets out 10 recommendations under the themes of governance and entrepreneurialism. ASOIF’s President Francesco Ricci Bitti also advised IFs to use the SportAccord platform to continue discussions with the Tokyo 2020 delegation.

At the AIMS General Assembly, President Stephan Fox’s continuing role as the Alliance’s representative on the GAISF Council was confirmed. Stephan Fox is also the Vice President of GAISF, and a leading supporter of the SportAccord United Through Sports Festival – one of the key highlights of SportAccord.

More high-level meetings took place including the ARISF General Assembly, where President Raffaele Chiulli confirmed the presence of President Bach from the IOC was ‘a very strong sign of his appreciation for what ARISF members are doing’.

Raffaele Chiulli was also confirmed President of SportAccord at its General Assembly.

Looking forwards to future events, in an exclusive interview with iSportconnect, Raffaele Chiulli shared his vision for the expansion of SportAccord into regional saying ‘relevance is the aim’. Regional SportAccord Pan America will take place for the first time, from 10 to 12 December 2019 in Fort Lauderdale, Florida, USA.

The Pan American sports business event will bring together around 500 delegates from 400 organisations, representing over 30 cities and regions, over 15 industry sectors and more than 40 international and regional sports federations. Event accreditation is priced at USD $1,500 and organisations who would like to take part can register here for Regional SportAccord Pan America 2019.

The 18th edition of SportAccord will return to Beijing, China from 19 – 24 April 2020. The key decision makers in sport will gather at the China National Convention Center for a week of networking and meetings. Organisations can register and take advantage of the myriad opportunities, high-profile events and social occasions being organised for SportAccord Beijing.

To take part in either event, organisations can register online or contact the sales team to become an exhibitor or partner.