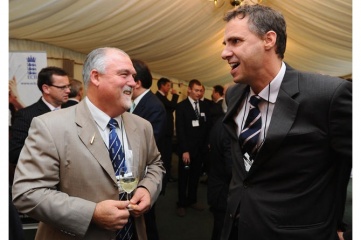 The International Olympic Committee (IOC) has appointed Philip French as its new Director of Public Affairs and Social Development through Sport Department (PASD), to start work on 1 March.

A British national, French is joining the IOC from the England and Wales Cricket Board where, as Director of Public Policy and International Relations, he was responsible for overseeing the organisation’s strategic development in public affairs and managing key external relationships.

The IOC says it has developed a comprehensive programme using sport as a tool for local socio-economic development and for humanitarian assistance.

“The PASD is central in defining the strategies for the development and implementation of such grassroots and peace projects around the world, as well as for advocating for the integration of sport and physical activity in national and international policies and programmes,” the IOC said in a statement.

“It is also responsible for fostering partnerships with a wide range of organisations specialised in development and humanitarian aid, including the agencies of the United Nations (UN) and non-governmental organisations (NGOs), in a bid to build a better world through sport.”

Before working at the England and Wales Cricket Board, Philip French held the position of Chief Adviser on Sport at the Department for Culture, Media and Sport of the United Kingdom government. With responsibilities ranging from grassroots and elite athlete funding ahead of the Olympic Games London 2012, the National Lottery, broadcasting and gambling, French led on drafting and delivering the government’s key strategic policies on behalf of the Secretary of State for Culture, Media and Sport.

Mr French was previously Chief Executive of Supporter Trusts, a British non-profit organisation which aims to provide a platform for fans to influence the running of their clubs, and Director of Public Policy at Premier League, where he had responsibility for public affairs, corporate communications and community development. He previously wrote for the Guardian newspaper and was a consultant to UEFA in the UK.

A graduate in Economics with Government of the London School of Economics and Political Science, Philip French has acquired over his career extensive experience in public affairs, international relations, community development and stakeholder management. He is very well acquainted with the world of sport, from both the media and management sides, and will be a valuable addition to the IOC’s team of directors.

A fan of athletics, football, cricket and tennis, Mr French is also involved in a number of grassroots and charity projects.