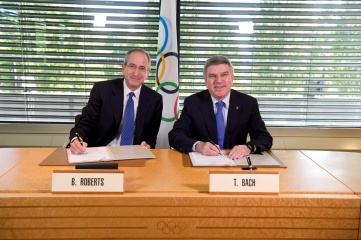 The International Olympic Committee (IOC) on Wednesday awarded NBCUniversal the US broadcast rights for the Olympic Games through to 2032.

The deal covers all media platforms, including free-to-air television, subscription television, internet and mobile. The agreement will run from 2021 to 2032, extending an agreement in 2011 which gave NBCU the right to broadcast the Olympic Games until 2020.

NBCU will now broadcast every Olympic Games and Youth Olympic Games through to 2032, regardless of which host cities are elected to host these events.

The deal is valued at US$ 7.65bn with an extra US$100m signing bonus that will be used to promote Olympism and the Olympic values between 2015 and 2020, the IOC said in a statement.

“This agreement is excellent news for the entire Olympic Movement as it helps to ensure its financial security in the long term, in particular future host cities of the Olympic Games, the athletes of the 204 National Olympic Committees and the International Sports Federations,” said IOC President Thomas Bach, who led the negotiations.

“The IOC has worked in close partnership with NBC for many decades, and we are thrilled we will continue to work with them through to 2032. NBC’s expertise in sports broadcasting, as well as their passion for the Olympic values, will mean we shall be able continue to offer first-class broadcast coverage of the Olympic Games to the widest possible American audience for many years to come.”

Steve Burke, CEO, NBCUniversal, said: “The Olympics are part of the fabric of our company, and we couldn’t be more excited that today’s announcement guarantees that this massively popular and profitable programming will continue to air every two years on the broadcast, cable, digital and mobile platforms of NBCUniversal for the next two decades."

NBCU first broadcast the Olympic Games in Tokyo 1964. By 2032, it will have covered a total of 23 editions of the world’s biggest multisport event.