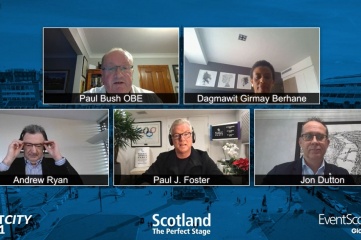 Event owners, organisers and hosts united at Host City 2021 to regain a sense of balance and direction for the future

The 8th Host City conference took place online from Glasgow, Scotland on 7-8 December, bringing 85 incredible speakers to a global audience of more than 500 to “Refresh, Regenerate and Reconnect” the events industry.

In his opening address, Paul Bush OBE, Director of Events, VisitScotland said: “Across the spectrum we are having to rethink out of necessity across a range of areas –  bidding, commercial viability, sponsorships rights, legacy impacts in a Covid-19 world, content distribution, media rights, the re-ordering of calendars due to postponements and cancellations.

“This climate of consistent uncertainty has once again accelerated us all to work in different ways, developing a range of resilient responses, innovation, spirit, and adaptation.”

Dr. Bridget McConnell CBE, Chief Executive, Glasgow Life said: “One of the most heartening aspects of the last few years has been our sector’s capacity for creativity, adaptation and innovation. The events’ industry is fundamentally rooted in a solution-focused approach, and that has never been more in evidence than over the last two years.

“The other heartening aspect has been the ongoing hunger for live events and the speed which audiences have both returned.”

“The International Olympic Committee, the IOC, managed to refresh, regenerate and reconnect with Tokyo 2020, the Olympic Games in July this year and will do so again for a second time in Beijing next February.”

Anita DeFrantz, IOC Member and LA28 Board Member said: “The greatest challenge going into Tokyo 2020 Games was trust. We needed the trust of the athletes, the organising committee and the Japanese people because there was great fear of being in a pandemic. I was so amazed at the joy of the athletes in the village. The trust was well placed; the Olympic movement did not create a super spreader.”

Looking ahead to 2028 she said, “The beautiful thing about Los Angeles is we don’t need to be transformed – we have all the venues we need.”

Ivo Ferriani, Executive Board Member, IOC and President of GAISF, IBSF and AIOWF said: “When I was introduced to the Host City brand by my collaborator Dr. Marco Mazzi, Vice-President, International Sports Travel Agencies Association (ISTAA), I was immediately impressed.

“Sport is one of the most important pillars to restore stability to the tourism industry and support society during this difficult time. Sport helps us to move forward.”

In his keynote presentation, Etienne Thobois, CEO, Paris 2024 Organising Committee for the Olympic and Paralympic Games said: “Our vision is a mix of the Olympic agenda, where the new norm provides cities with an increased flexibility in designing the Games to meet long term development goals; and then it’s about what we want to do with those Games. For Paris, it’s very important that these Games become a unique opportunity to enhance the role of sport in society.”

In his keynote presentation, Vincenzo Novari, CEO, Milano Cortina 2026 Organising Committee for the Olympic and Paralympic Winter Games said: “We have to create events and attention and engagement not only for one month of competition, but for a time of four years. We cannot think that the attention and the commitment of our major sponsors could be only for one limited time.”

In her keynote speech, Katie Sadleir, Chief Executive, Commonwealth Games Federation said: “It’s going to be a spectacular event in Birmingham next year. This will be the first multisport carbon neutral event.

“We’re really keen to make sure the Commonwealth doesn’t just take place in our major nations. We want to see the full members having the opportunity. So we are encouraging people to looking at co-hosting in cities, countries or regions. We’re looking for creative solutions. We’re also working with the Global Esports Federation on an esports strategy. “

In a keynote Q&A Mikaela Cojuangco Jaworski, Executive Board Member, International Olympic Committee said: “The Olympic Channel is handling a side of the Games which is more vibrant, creative and attractive. Our approach has attracted a lot of younger audiences.”

Presenting The New Approach to Selecting Olympic Hosts, Octavian Morariu, IOC Member, Chair, Future Host Commission for the Olympic Winter Games, International Olympic Committee and President, Rugby Europe said: “The host election process needed to change because, in the past, cities trying to outbid each other resulted in excessive expenditure. Lobbying sometimes led to ethical issues. In the words of the Olympic president, there were too many losers.

“The sweeping reforms of Agenda 2020 were designed to reflect the modern priorities of the Olympic movement.”

In his keynote address, Lord Sebastian Coe KBE, President, World Athletics said: “This is the right moment to harness the power of our sport to bring positive change.

“It is not just what happens to a city or community during an event, but what is left behind that helps communities choose healthier lifestyles and create partnerships for years to come.”

On the opening panel, the scale of the impact of the pandemic was summed up by IOC Member and Finance Commission Member Dagmawit Girmay Berhane, who said: “Every aspect of life will never be the same, personally and professionally. That’s why our President took the bold step of taking the Agenda 20+5 roadmap.”

Andrew Ryan, Executive Director, ASOIF (Association of Summer Olympic International Federations) said “The biggest impact has been the way the pandemic has acted as a catalyst. IFs have been slow to adapt but one of the few positives from this period is that it has accelerated the way IFs look at how they should be placed for the future.

“In the past my members were approaching cities with the same model, now it’s much more of a partnership and a willingness to take an innovative approach.”

Paul J. Foster, CEO, Global Esports Federation said: “We spent this period with one foot on the accelerator, the other and the brake and both hands on the wheel! We thought we could do more than stage just prestigious events. We realised we had responsibilities around health and wellness, our connection with education and youth as we think about the future of work and how we can contribute to the development of cities – and also societal impacts such as bringing down unacceptable barriers to inclusion and prosperity.”

Jon Dutton, Chief Executive, Rugby League World Cup 2021 said: “We have all tried to master the art of managing uncertainty. Having to be nimble and developing a high degree of resilience. Events in the future can look to opportunities from the crisis, seeing sports as a force for good and to influence policy makers. Events with a purpose are here to thrive – what happens off the field of play is as important as what happens on the pitch.”

Speaking on the panel Diversity and Integrity in Leadership, longstanding IOC Member, FINA Vice President and activist Sam Ramsamy said: “Sport has changed forever; the components have become highly commercial. We have to consider sport as entertainment, whether we like it or not. That is what fans want. It is important that we have at the foremost end diversity and inclusion to take the entire grouping forward with us.”

Jamaican swimming champion Michael Gunning said: “As a young boy learning to swim there were no people of colour around me - that role model was missing. I enjoyed breaking the mould and doing something that not many people like me did.

“Jamaica has strict laws about being gay. It's heart-breaking – if I showed affection to the same gender I would be sent to prison. Athletes have to come together; I want to help inspire people and show that it's OK.”

On the panel Partnership Approaches to Event Hosting, Trudy Lindblade, Chief Executive Officer, 2023 UCI Cycling World Championships said: “We have the benefit of it having never been done before, so it’s been cocreation from the start. We’ve pulled our commercial rights together to share the risk and the reward.”

Sustainability was a recurrent theme of the conference. David de Behr, Head of Sales Aggreko Event Services, Aggreko said: “In the last year Aggreko has brought out its energy transition strategy and we support our customers on their journey to decarbonise in the future.

“What we do now is try to reduce the energy needs of our customers. 90 per cent of our work goes into this, without risking the critical supply for the event. This means difficult discussions with the rights holders and organisers – but it’s a positive evolution for us.”

Tim Briercliffe, Secretary General, AIPH - International Association of Horticultural Producers said: “The themes of our events really tie into the message of sustainably. The theme of the Beijing 2019 Expo, where we had 10 million visitors, was ‘Live Green, Live Better; in Almere next year it will be ‘Growing Green Cities’; in Doha 2023 it will be ‘Greener Desert, Better Environment'.”

Laura Lopez, Director, Conference Affairs, United Nations Framework Convention on Climate Change (UNFCCC) said: “My top tip is: be like Glasgow! That was a key element in making our event a success. We had the most people we’ve ever had at a COP – more than 38,000. One of the reasons we had so many people coming to COP26 is that they had assurances they would be taken care of.”

On the workshop on Defining event impacts and promoting positive outcomes, Joel Lavery, Strategic Lead Major Sporting Events, West Midlands Growth Company said “As we were looking at the Commonwealth Games, Birmingham was keen to measure the impact of the Games on the city. So we looked at the impact of various international and national events, and there was zero consistency – it was like trying to compare apples and pears.

“We as a city need to be clear on the type of things that we need to measure. That led to us developing a major events strategy.”

Technology also featured prominently on the conference agenda. Presenting on The Digital Transformation of the Olympic Games, Kevin Li, Head of International Sports Industry Department, Alibaba Cloud Intelligence said: “In January 2017 Alibaba became the official cloud provider of the Olympics. During 2021, the most important milestone is to support Tokyo 2020 Olympic Games which is the first time on cloud. Our teams are working to provide cloud tech support to Beijing 2022 Winter Olympic Games. As a worldwide Olympic partner we share the vision of the IOC of using cloud computing and digital intelligence to improve Games operations.”

Speaking on the panel Broader Casting – Who Owns the Rights?, Jeff Foulser, Chairman, Sunset+Vine said: “Sport is the ultimate unscripted live drama. People love to come together for the real moments. You need the platforms to build engagement, but you want people to come together hopefully in one room.

“It’s important that we don’t lose sight of the fact that there are people who can’t afford subscription channels. For the bigger events we want to make the sports as available to as wide as possible an audience – that’s how they grow and expand.”

In a joint presentation with World Triathlon, Michael Dhulst, Co-Founder & CEO, Super League Triathlon said “The Arena Games Triathlon is a new concept developed under Covid to be in line with social distancing and leverages the booming virtual racing environment. It opens up the possibility to open up the sport to much bigger participation.”

Sarah Lewis OBE OLY said “Host City has been outstanding this year – huge compliments. It’s demonstrated the value of many positives that we’ve taken from the pandemic as an events industry.”

Host City is the event and media brand that connects the owners, hosts and organisers of major events.

Launched in 2014. Host City events are renowned for the highest level of speakers, content and networking.