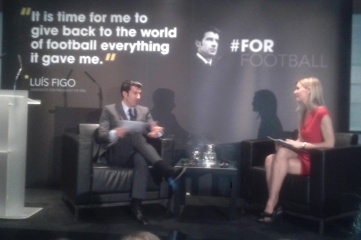 Luis Figo, the retired Portuguese footballer who is running for the presidency of FIFA, has said that the organisation is right to recommend hosting the World Cup in late November and December 2022 – despite the disruption this would cause to the European football leagues.

“The FIFA Task Force recommendation is the right decision for the World Cup,” he said in a statement.

After a six month consultation process, the FIFA task force recommended earlier today that the 2022 World Cup should take place at the end of the year, to avoid clashing with the Olympic Games, Ramadan and the hottest months of the year.

“It has to be played in the best possible conditions for the fans and players who will enjoy a great World Cup atmosphere, and for Qatar who deserve to be put in the position to organise a great event,” Figo said.

“With good will and a sense of solidarity it is always possible to find the right solutions.”

Figo’s endorsement is in contrast to the reaction of other leading European football administrators. The European Professional Football Leagues and the European Clubs Association had been pressing for the World Cup to take place from 5 May to 4 June and will continue to oppose the proposed date change.

Richard Scudamore, the chief executive of the English Premier League, said “It's the European leagues and European clubs that are going to suffer the most, so it's very disappointing."

While Figo has been outspoken about the need for transparency in FIFA, he is taking a very diplomatic stance on the issue of Qatar’s right to host the World Cup. At the launch of the manifesto for his presidential campaign last week, he acknowledged that there are reports of “irregularities that have taken place, reports not made public” but said “If there are no irregularities, I don’t think Qatar should be prejudiced [against].”