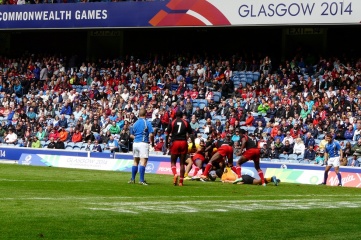 The International Rugby Board, which has governed Rugby Union under that name since 1886, is to be known as World Rugby from 19 November as part of a rebrand that underlines the organisation’s commitment to global inclusivity.

The rebrand is linked to the governing body's stated mission “to build a stronger connection with fans, players and new audiences worldwide.”

"In a crowded global entertainment and sporting marketplace, the role of the IRB has evolved from Game regulator to Game inspirer," said IRB Chief Executive Brett Gosper.

"With this we must continue to appeal to those who know and love the sport and its heritage, while attracting, engaging and inspiring those who have no connection with the sport across multiple cultures and languages around the world.

"World Rugby collectively has the ingredients and tools to do just that. Rugby’s global appeal is founded and positioned on its unique character-building values and inclusive ethos and we want everyone to feel connected with the sport and Rugby’s ongoing success story."

Further details of the new brand, including the new logo, will be revealed at the IRB World Rugby Conference and Exhibition, which takes place in London on November 17-18.

"This move is more than just a name change, it is a mission statement,” said IRB Chairman Bernard Lapasset.

"Rugby continues to thrive, reach out and engage new audiences and participants in record numbers and the IRB has been at the heart of that growth. We are committed to furthering that growth beyond our traditional family and fan base with a public that expects to be entertained, informed and interacted with.”

Worldwide participation in rugby is has tripled to reach 6.6 million players over the past four years. The IRB cites the Rugby World Cup and the inclusion of rugby sevens in the Olympic Games as contributing factors, coupled with development strategies and record investment.

The rebrand also opens the opportunity for launching new event properties. "World Rugby clearly aligns our name with our mission and allows us to organise new and existing consumer facing properties in a way that they will be more impactful and more appealing to the sport's growing global fan base," said Lapasset.

The branding and positioning of Rugby World Cup 2015 will remain unchanged.

To read an exclusive interview with IRB / World Rugby CEO Brett Gosper, register to receive the next issue of HOST CITY magazine for free.

To register for the 2014 World Rugby Conference and Exhibition at the Hilton Metropole, London, visit www.irb.com/confex