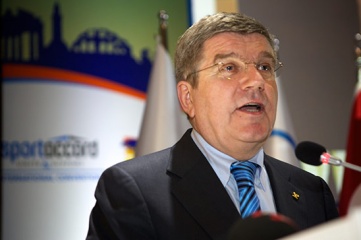 The President of the IOC, Dr Thomas Bach, confirmed at SportAccord Convention on Thursday that a series of measures have immediately been put in place to safeguard the success of the Rio 2016 Olympic Games.

The IOC has asked leaders in Brazil to form a high-level decision making body to coordinate the delivery of the Games. The IOC is also going to appoint a local project manager, with task forces focusing on specific areas.

Gilbert Felli, Director of Olympic Games at the IOC will head up a more frequent schedule of visits, starting on Monday. International federations have also been asked to play a more hands-on role in monitoring progress.

“We know about these concerns because of the excellent work of our coordination commission, which had a visit to Rio not too long ago,” President Bach said at the SportAccord Convention in Belek. “We believe Rio can and will deliver excellent Olympic Games if the appropriate actions are taken.”

Leaders from within the IOC met with the Rio 2016 organising committee on Wednesday at SportAccord Convention. “We had a very constructive atmosphere with our partners in Rio,” said Bach. “We then decided some measures – how we can accelerate the works in Rio, how we can work even closer with the organising committee and the different levels of government.”

The organising committee has been asked to put in place a high-level decision making body representing different levels of government, communication between which is a particular area of concern.

“We will use our experience in organising Games to show how different levels of government can work better together; how seamless cooperation can be done; how can you then benefit from experience of previous organisers or experts.”

The three task forces to be established will focus on construction, operations and engaging population behind the Games. Mindful of recent protests directed towards the FIFA World Cup, Bach stressed that the benefits of hosting the Games would be communicated to the local population. “We have a very good message to send to the Cariocas because these Games will leave a great legacy for the city.”

Bach was keen to emphasise that the supervisory measures have not been enforced onto the Brazilian organisers. “We have informed the organisers and the major of Rio. The measures were very much welcomed. The strong commitment by the IOC to the success of these Games is very well appreciated by our Brazilian partners.

Gilbert Felli is due to meet with Mayor Eduardo Paes and the organising committee on Monday 14th April. “A couple of days later he will have his first assessment,” said Bach. “This is not a measure being imposed by the IOC; this measure has been appreciated by the Organising Committee and the mayor.”

Unwilling to apportion blame at this stage, Bach said: “This is about 2016 and we have to look to the future, and not start a blame game for the past. We need all our energy; we share their concerns to make the games a success.

“After the closing ceremony of the Olympic Games we can come back to this question of responsibility. But now we would not act in a responsible way if we were to look too much into the past.”