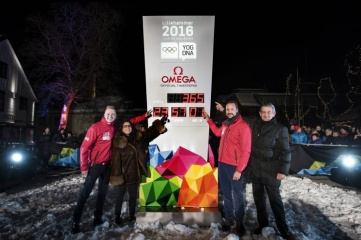 OMEGA has acted as Official Olympic Timekeeper for the Olympic Games since Los Angeles 1932 (Photo: Lillehammer 2016)

As Lillehammer celebrated one year to go until the Winter Youth Olympic Games (YOG), its young organisers were praised by the event’s owner and custodian, the International Olympic Committee.

Speaking at the ceremony, IOC vice president Nawal El Moutawakel said: “This is truly a Games by young people for young people and a big thank-you goes to the tremendous efforts of the young and talented local Organising Committee.”

Lillehammer 2016 CEO Tomas Holmestad said: “Every one of the next 365 days now counts to making Lillehammer 2016 a huge success.  We have an amazing team of young, talented staff and I know we will deliver a unique Winter Youth Olympic Games.”

The festivities will continue for several days in Lillehammer, Hamar and Gjøvik, with cultural spectacles, a YOG-themed ice hockey match and the “Sjogg Film Festival” in the centre of the city.

Sjogg, the Norwegian word for snow, is also the name of the Lillehammer 2016 mascot.

During the Games, Lillehammer, Hamar and Gjøvik will also host “learn and share” activities, which the IOC says is designed to provide guidance on Olympic values, the benefits of leading a healthy lifestyle and “how to be true champions on and off the field of play”.

During the unveiling of the clock, the Crown Prince and El Moutawakel were joined by Angela Ruggiero, Chair of the IOC coordination commission and Norwegian Minister for Culture Thorhild Widvey.

Earlier in the day, El Moutawakel and Ruggiero took part in activities including a school sports day and a session on the ice, where Olympic ice hockey champion Ruggiero provided a coaching session to local youngsters.

“We have an Olympic Games legacy under our belts, and now we will create the legacy of Lillehammer 2016,” said Holmestad.

The athletes will compete in the same seven sports as those on the Olympic programme, plus some new additions such as Monobob, snowboard cross and cross-country cross as well as mixed-gender and mixed-National Olympic Committee competitions.

“With its exciting sports and unique spirit, this will certainly be a wonderful and unforgettable YOG,” said El Moutawakel.