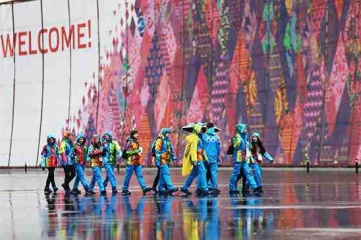 As the 2014 Winter Olympic Games draws to a close, top IOC figures say the hosting experience will benefit future events in Russia

Sochi 2014 will create a significant “human” legacy of experience gained by those working to successfully deliver the Winter Games, according to leading figures in the IOC and the Organising Committee.

“The Games will leave a tremendous human legacy,” said Jean-Claude Killy, Chairman of the IOC Coordination Commission for Sochi 2014 on Friday.

“The highly trained professionals and volunteers from the Games will no doubt play a key role in the success of the World Cup and other major sporting events that Russia will host in the future.”

Sochi 2014 marks the first time that the Olympic Winter Games have been held in Russia and signals the first of many major sporting events being held in the country, with the inaugural Russian Grand Prix due to take place in Sochi in October 2014 and the FIFA World Cup coming to cities all over Russia – including Sochi – in 2018.

“There will be tremendous synergies for the country in a number of areas as it strives to put on these great sporting events,” said Killy.

Hosting the 2014 Olympic Winter Games has also led to the establishment of the Russian International Olympic University (RIOU), which opened in Sochi earlier this year to train the next generation of sports management professionals, catering to the demand in Russia and around the world for highly qualified specialists in the international sport industry. Topics of study will include venue management, event management, media management, governance and sport diplomacy, and talent management.

“Currently, not just in Russia but all over the world, there is a lack of qualified specialists in sports management,” said RIOU Rector Professor Lev Belousov. “RIOU's task is to set up a mechanism for leading Russian and international practising specialists to pass on practical knowledge to students and to train a new generation of highly qualified sports managers in specialisms needed by the Olympic and Paralympic movement and by the international sports industry.”

During Sochi 2014, students participated in an observation programme allowing them to assess in detail the complex logistical operations behind the organisation of the Winter Games. “This is a once-in-a-lifetime opportunity,” said Aleksander Bryantsev, head of education at Sochi 2014.

IOC President Thomas Bach also hailed the success of the RIOU, saying “There will be many lasting legacies from Sochi 2014, including the RIOU. The Olympic Movement as a whole will benefit from the establishment of the university, as, of course, will Russian sport.”

Dmitry Chernyshenko, President of the Sochi 2014 Organising Committee added “The Russian International Olympic University serves as an example of the significant lasting legacy for Russia after the Games have been hosted in Sochi,” he explains. “It will become the key centre for training a new generation of highly-qualified sports managers in Russia.”