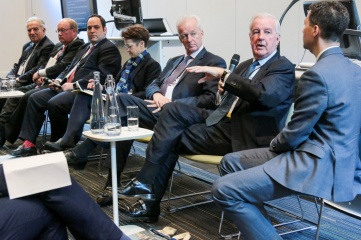 As Host City’s most successful conference and exhibition yet closes in Glasgow, the organisers announce an extra event in Beijing in May for the Asian market

Leading figures from the world of sport governance and major event ownership convened in Glasgow on Monday and Tuesday for the Host City 2016 Exhibition and Conference to discuss how to attract and host secure and engaging sports, business and cultural events.

It was also announced that an additional “Host City Asia” event will take place in Beijing on 18 October 2017.

“In its third year, Host City conference and exhibition is firmly established as the leading international meeting of cities and sports, business and cultural events. We are delighted to see Host City continuing to grow in Glasgow, Scotland,” said Matthew Astill, CEO of Cavendish Group.

“In response to incredible market demand, we are pleased to launch an additional Host City Asia event in Beijing in 2017, where international event owners and suppliers will meet Chinese and Asian hosts and investors.”

Speaking at Host City 2016, Wang Dong, Vice President of Chinese sports media company Alisports: said “This is the spring of the Chinese sports industry… we want to get more people involved in the beauty of sport.”

Host City is the largest and fastest growing international meeting of its kind. At the third edition, the topics of future major events and integrity of sport were high on the agenda.

In his opening keynote address heading up a list of world-class speakers, Sir Craig Reedie CBE, IOC member and president of the World Anti-Doping Agency talked about how in an ever-more competitive field, hosting events is a “very active place” in contrast to the major multi sports events like the Olympic Games and the Commonwealth Games who, he said, have struggled to attract bid cities in recent years.

During the first panel discussion on the topic “What does future hold for major events?” Dimitri Kerkentzes, deputy secretary general, BIE (World Expos) said: “World Expos cannot be viewed from home. They must have participation and support from the public… We need to ensure that the event will benefit people from the host cities, and that it doesn’t leave white elephants behind.”

"We need to be cautious about the fairness of the bidding process.”

He also commented that the level of flexibility afforded by the new bidding rules set out in IOC’s Agenda 2020 programme of reform needs to be carefully considered, saying “Changing venues from the bid book is taking it too far."

Sarah Lewis, Secretary General of the international Ski Federation (FIS) and the Association of Olympic International Winter Federations (AOIWF) said: “It is necessary to maximize the usage of existing facilities that would change the focus on having compact events. Compact events are convenient but don’t offer the best legacy opportunities”. She said “multi-city and multi-country events may be the future”.

Paul Bush OBE, Director of Events, VisitScotland said: “The benefits of hosting major events are both hard and soft. The soft benefits, which you have to articulate very carefully, are becoming very important.

“The importance of transparency in the bidding process is crucial right now and is growing every year”.

The issue of good governance was further explored in the following panel session on “Has sport lost its integrity and how can it win confidence back?”

Dr. Bridget McConnell CBE, Chief Executive, Glasgow Life said: “A city’s values must shape and drive what you bid for and how you do it. If you lose public confidence in sport integrity you lose countries and cities bidding.”

When asked whether cities would turn their back on hosting events that can’t prove their integrity, she said “I can certainly say this of Glasgow. We would not want to be connected to any sport that had major controversy associated with it”.

Yves Le Lostecque, Head of Sport, European Commission said “In Europe we are defending values and we have to promote them. Integrity and governance are key parts of the EU mandate for sports. Our member states are keen to have the values maintained and we can help through policy cooperation and financial support.”

He also said "the perception of sport as a utopia needs to be changed. We need to be more realistic when looking at it".

Risto Nieminen, President, Finnish Olympic Committee said: “We need to create standard for doping control that spans across all countries” and added “business and entertainment are not the basis of sport. Instead, inspiration, well-being, optimism, and happiness.”

Ignacio Packer, Secretary General of children’s rights charity Terre des Hommes said: “The sport sector is opening up increasingly to the human rights sector”. He also questioned the tendency to limit the definition of “success” in hosting events to financial outcomes. “We believe that success is about people”. Ignacio also commented on his participation at the Host City Conference saying “I like coming to Host City because I am not with usual colleagues. I learn a lot here.”

The delegates, which included several IOC members, were also addressed by senior figures involved in bidding for the 2024 Olympic Games from Budapest, Los Angeles and Paris.

The Host City brand began life in China in 2003 as a bilingual magazine for the Beijing Organising Committee of the Olympic Games. The Deputy Mayor of Beijing in 2009 presented the CEO of Cavendish Group with the “Great Wall Friendship” award in recognition of Host City’s role in bringing foreign technology content to China and creating an Olympic infrastructure partnership.

Cavendish Group is also known as the owner of the ICC (www.internationalcapitalconference.com ), China’s largest outbound investment event that is now in its seventh edition.

Host City’s Editorial and Conference Director Ben Avison said: “China is investing $850bn in sports by 2025 and is looking for global partners to develop its entertainment and cultural sectors. Host City Asia provides the platform to connect the international industry with this booming market.”

All the Host City 2016 Conference keynote addresses and plenary session content be streamed at www.hostcity.com/hc2016/audio – provided by sound-sharing platform audioBoom.