How to get everyone behind your major event - Host City News

Home
»
News
»
How to get everyone behind your major event 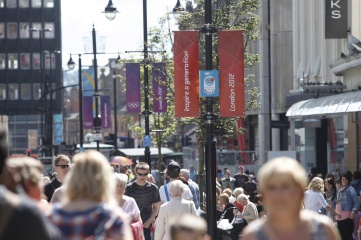 Major event organisers need to take the public with them, writes Andrew Hodson, Business Development Director at CSM Live, ahead of his participation in Host City 2019

Major events can have an incredibly positive impact on their host cities and citizens. If we are to avoid the lack of public support that can lead to the likes of Calgary and Graz withdrawing their bids for the 2026 Winter Olympics, we must ensure that major events achieve an international reputation for being cost effective, inclusive and having long-term sustainable benefits. We need to work together to engage with all stakeholders, including the general public, so that everyone feels involved.

In my 37 years with CSM Live (in its different guises) I’ve had the pleasure to work with many great organisations and hosts that understand the benefit of branding not only event spaces and fan zones, but entire cities and countries, and the importance of wide public engagement.

London 2012 is a fantastic example of this attitude. They worked to get the public onside right from the start, launching the 2004 / 2005 bid in tandem with a major PR campaign which included events and a city dressing campaign around the whole of the UK. This commitment to bringing the excitement of the Games into the public domain only increased during the actual games, with the aim to ‘Inspire a Generation’. CSM Live took point on both the venue and the city dressing, creating the space branding guidelines, and producing and installing the branding.

To ensure uniform, easily-accessible branding across the country, we created an online catalogue from which local authorities and institutions could order Games Look and Feel elements based on a pre-designed Kit of Parts. In the end, we dressed 33 London Boroughs, 11 Host Cities, 43 Live Sites and communities throughout the UK, with everything from banners and bunting to giant shot putts falling from the sky and over-sized inflatable mascots rising from the ground; we lit up buildings in brand colours; installed branded planting, pavements, transport and transport hubs; and created soundscapes across bridges and light projections in the sky.

Obviously, this approach can be very expensive, but one solution is to find a sponsor or partner with similar goals. The Tour de France Grand Depart found that in Yorkshire Building Society, who were extremely proud to be able to sponsor this iconic event as it travelled through their heartland during their 150th anniversary celebrations. We worked closely with the event organisers, local councils and Yorkshire Building Society to create activations and branding concepts that helped local people celebrate their proud Yorkshire heritage.

For a perfect example of how a unified and integrated major events policy can positively impact a whole country, just look to the country that’s hosting Host City. I have had the pleasure of working in Scotland many times including both the Ryder Cup and the Commonwealth Games during their amazing 2014 year - the “Big G” logo, which we created for the Games is now a permanent selfie inspiring fixture, and I expect big things as they continue the ‘Scotland the Perfect Stage’ strategy onto 2025.

Hear Andrew Hodson’s “lightning talk” at Host City 2019, the largest meeting of cities and sports, business and cultural events in Glasgow on 26-27 November