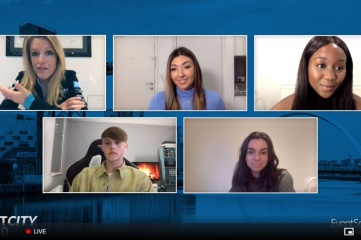 Event organisers today emphasised that the health and safety of athletes, spectators and staff is their number one priority in reopening for business in the wake of the COVID pandemic.

On the second day of Host City 2020, speakers from across the events and venues industry, including rights holders, organising committees, facility managers and suppliers, exchanged views about tackling the COVID challenges. They also discussed how they’ve used the unprecedented pause in event staging to rethink business models and strategies.

More than 1,000 delegates tuned in to listen to the 100-plus speakers at the largest annual meeting of cities and sports, business and cultural events. The theme was “The Big Restart”, with panels over two days assessing how event stakeholders can bring about “Recovery with a Purpose for the Digital Age”.

The opening panel focused on the road to recovery, asking the question ‘What strengths have carried our sector through the storm?’.

Joe Ryan, Head of Health and Safety at the Birmingham 2022 Commonwealth Games, talked about how they had dealt with COVID challenges and were well-positioned to react quickly to new public health messaging from government, the rollout of the coronavirus vaccination programme and changes in policy to bring people back to work in the office and accelerate preparations: “We need to monitor those and implement change where we need to and be very reactive.”

Michelle Hooper, Tournament Director of Rugby World Cup New Zealand 2021, said the event organisation had benefited from the government going “hard and early to stop COVID coming in at the border”. For the rugby showcase in autumn next year, the managed isolation and quarantine requirements for 12 teams was a critical collaborative effort with the government and World Rugby.

John Langford, Chief Operating Officer of AEG Europe, which operates multipurpose venues such as The O2 Arena in London and Staples Center in Los Angeles, said the sports and entertainment giant had worked hard on health and safety plans to prepare for a full re-opening of COVID-secure venues. But there were uncertainties over “what the future will look like” in terms of ticket demand, the economy and how existing business models might have to change.

He said government help was needed because commercial insurance was not available. “Without a government-backed insurance scheme we don’t believe we can open effectively. There’s so much risk about events being rescheduled or cancelled again.”

In the week when the first COVID vaccine jabs were administered, speakers were optimistic that 2021 would see a much-needed revival in the events business.

Jon Ridgeon, CEO of World Athletics, presented a fascinating case study on how track and field’s governing body had successfully staged the World Half Marathon championships in Gdynia, Poland, in October. It had been postponed from March.

He said it was “far from easy and only possible due to strict COVID protocols”. World Athletics had to “to take back control of the competition environment”. More than 100 men and a similar number of women, drawn from 53 member athletic federations, participated.

Ridgeon praised the “strong cooperation and can-do attitude” of the Polish government, local organising committee and city of Gdynia.

Athletes and officials were tested for coronavirus and accommodated in a COVID-secure bubble across two hotels. Managing the testing regime, including administering about 90 tests per hour for a peak inflow of athletes and their entourage, keeping the hotel bubble secure and understaffing of the medical team were among the challenges.

Although there were increased costs in holding the World Half Marathon amid the pandemic, coupled with significantly reduced income streams, it was deemed a major success. Ridgeon said athletics’ governing body was now better placed to upscale its COVID protocols and improve them for bigger events to come in 2021.

“We’ve got our head around the fact that the first half of 2021 is going to be compromised,” he added, saying he hoped more athletics events would be staged from summer onwards.

Tatsuo Ogura, Director of International Communications for the Tokyo Organising Committee of the Olympic and Paralympic Games, gave an update on the pandemic’s impacts and how organisers were working on a pathway to stage COVID-safe Games next summer. With 226 days to go, he said athletes were front and centre of plans and the Olympics “provides a symbol of hope, resilience and the power of humanity working as one”.

In a fascinating interview session, Sir Russell Coutts, CEO of SailGP, spoke about his transition from an Olympic gold medallist with five Americas Cup titles under his belt, to sports administrator. He has transformed sailing with the launch of what is billed as “the world's most cutting-edge sail racing league”.

“People looked at sailing as being far away and quite slow moving. SailGP couldn’t be further from that,” he said, adding that it was both financially viable and in a format that could be neatly packaged for broadcasters and consumed by a global audience. Coutts said there was a big effort on sustainability and youth engagement programmes and ensuring a low carbon footprint.

Another topic of discussion was the convergence of digital and real-world events. It brought examples from Super League Triathlon and golf’s European Tour about how they have innovated to stage virtual sports for elite athletes as they look to learn lessons from the Esports community and integrate VR and AR into event strategies.

He said it was a huge hit across triathlon’s digital channels and an opportunity for the sport to extend the concept beyond the pandemic to become part of its events portfolio.

Later on the conference programme, in a session led by Katie Traxton, Chief Communications Officer of Formula E, four young ‘Gen Zers’ explained the importance of social media channels in their lives and how they engage and share content with friends. It offered some eye-opening comments for the events industry about how young people connect with each other in 2020. They highlighted the importance of being authentic and when posting on their social platforms, and of only identifying with brands that reflect their values.

In the final panel session, sports officials from Florida spoke about how they are readying to welcome the world again once the pandemic has passed.

Angela Adams Suggs, President & CEO of the Florida Sports Foundation, said the not-for-profit corporation’s goal was to continue to grow partnerships and promote professional and amateur sport to maintain its thriving sports industry and attract international visitors in 2021.

Wrapping up Host City 2020 with final remarks, Paul Bush, director of events at VisitScotland, one of the conference’s supporting partners, described the level of discussions and debate across the two days as “phenomenal”. Among the highlights, was hearing speakers say that “events will return… we just don’t know when, how and what shape they will be”.