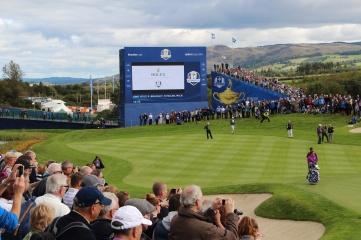 Gymnastics and Golf are to join the prestigious line up of leading sports who will stage their European Championships together in 2018 for the first time in their history, the sports’ European associations announced on Friday.

The dates of the inaugural Championships were also confirmed as the 1st to 12th August 2018.

The two new sports join Athletics, Aquatics, Cycling, Rowing and Triathlon, who have decided to come together for the first time for the European Sports Championships which will be staged in the Host Cities of Glasgow and Berlin.

“One of the challenges this project had to face was to create a programme that could offer the best conditions for athletes to express themselves while also creating interest for the main TV networks in Europe. The result of very fruitful discussions allow me to express my satisfaction that Glasgow and Berlin will showcase one of the best events of all time,” said Paolo Barelli, President of the Ligue Européenne de Natation (European Aquatics.

“Each individual European Federation will create a fantastic programme that will maximise interest and LEN is proud to be a pioneering partner of such an ambitious project that will contribute significantly to the development of sport.”

“It is very exciting for Golf Europe to be invited to join some of Europe’s leading sports in the inaugural European Sports Championships, with three new European Golf Team Championships for female, male and mixed teams,” said Keith Waters, The European Tour’s Chief Operating Officer and Director of International Policy.

“This is part of our vision of encouraging all European nations to participate in golf, and it is fitting that Gleneagles will host the first staging of this event, having been the venue for last year’s Ryder Cup, when Europe memorably united through team golf.”

Berlin will host the 2018 European Athletics Championships from the 7th to 12th August, with Glasgow hosting the six other European Championships over the 12 days.

“As one of the key sports, European Athletics has been happy to lead the process in the creation of the principles of good governance for the inaugural European Sports Championships, and we are pleased to move forward with this strong framework in place,” said European Athletics President Svein Arne Hansen.

“We are looking forward to a fantastic European Athletics Championships in Berlin in 2018 as part of this exciting multi-sport concept. We are sure the European Sports Championships will bring additional values and benefits to athletics in Europe and to the Berlin championships.”

The partnership between European Athletics, Aquatics (LEN), Cycling (UEC), Rowing (FISA) and Triathlon (ETU) welcomed European Gymnastics (UEG) and Golf Europe is set to create a major new multi-sport event on the world stage, attracting a projected television audience of around 850 million and an even wider audience via multiple digital platforms.

This innovative new approach by the governing bodies, who announced their plans earlier this year, brings the existing European Championships together from seven sports in a sustainable format once every four years in order to continue building their prestige, profile and media exposure.

Around 1,500 athletes will compete in Berlin as part of the European Athletics Championships while approximately 3,025 athletes will visit Scotland for the other six events.

All seven Championships will be staged within the agreed date window.

“With all the sports now confirmed for 2018 Glasgow is again ready to show the excellence and innovation with which it can stage world class events on the global stage,” said Councillor Frank McAveety, Leader of Glasgow City Council.

“Major events have become a crucial part of our city’s economy and we can now look forward with tremendous excitement and focus to partnering with this fantastic group of sports to continue to create opportunity and help improve health and well-being outcomes for our citizens.”

The European Broadcasting Union (EBU), the consortium for the continent’s public service free-to-air broadcasters, will be the broadcast partner for the combined championships, which are expected to generate more than 2750 hours of programming across Europe’s biggest broadcasters.

EBU President Jean-Paul Philippot, said: “With seven sports now part of the first edition, the European Sports Championships will be the centrepiece of the sports season in Europe and public service media is proud to participate in the promotion of European sports and its athletes through extensive free-to air coverage across television, digital and radio.”

The Golf event will be staged over 5 days and include men’s team, women’s team and mixed team competition.

Two male and female athletes per nation will participate, with the top 16 European nations included.

The Gymnastics event will include both the Men’s and Women’s Artistic Championships, with around 600 athletes competing in Glasgow over six days.

“We are really excited to be included in the 2018 European Sports Championships as it represents a huge opportunity for Gymnastics to further raise its profile right across Europe,” , said Georges Guelzec, President of European Gymnastics.

“We can also think of no better city than Glasgow to host our 600 competitors who will compete in the men’s and women’s European Artistic Championships.”

Innovative event hosting formats is a key theme of Host City 2015, which takes place in Glasgow on 9th to 10th November. Register your attendance at www.bidtowin-hostcity.net