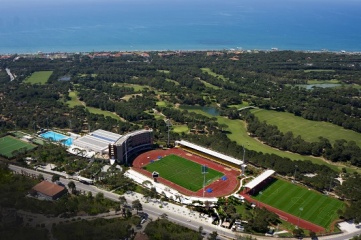 Gloria Sports Arena viewed from above

The largest golf course of Turkey with 45 holes, the first thalasso centre of the region and the most comprehensive privately financed sports arena of the country – superlatives are standard for Özaltin Holding, owner of Gloria Hotels & Resorts.

Holding training camps in Turkey is no rareness for years. Especially the region around Antalya is almost second home for professional soccer leagues in winter. Now Belek, only 30 kilometres away from Antalya and known as the mecca for golf enthusiasts, is becoming one of the most favoured destinations for top-ranking athletes from all branches. Thanks to Özaltin Holding, having founded the Gloria Sports Arena from the ground beginning of 2015, and now can boast about great occupancy rates in the second year of operation.

Each day elite athletes – especially from Germany, Austria and Scandinavia – use the multipurpose sports facility for tests, training and regeneration. Athletes, swimmers and divers, martial artists, basketball and volleyball players as well as hockey players train in the proven outdoor and indoor facilities and in the aquatic centre, to optimize their best times for diverse competitions such as the European Athletics Championships in Amsterdam or Olympics in Rio. The majority of the national coaches agree that the Gloria Sports Arena is one of the best sports complexes of Europe due to its comprehensive services, conditions regardless of weather and the reachability from many parts of the world. In particular the first internationally standardized hockey course of Turkey with Olympic coating is a blessing to hockey players for their outdoor-training even in winter.

Since the opening in January 2015 professional and amateur athletes from more than 54 countries and over 100 sports teams could convince themselves of the excellent training possibilities.

More than 50 sports
There are no limits regarding sports disciplines at the Gloria Sports Arena: More than 50 sports can be exercised on a total area of 105.000 sq. indoor, outdoor and in the aquatic centre. Next to the track and field stadium with a football field, comprising 1.600 spectators, all track and field disciplines, boxing, fencing, judo, wrestling, handball, basketball, volleyball, table tennis, gymnastics, badminton, dance sports, weight lifting and more can be trained here. Outside of the stadium one Olympic pool, one short lane multi-purpose and diving pool, diverse running tracks, tennis courts, climbing walls and further areas for aerobic, Pilates and Boccia are at service. In the indoor halls the galleries can be extended for up to 1.200 spectators. The equipment is also second to none: The parquet floor for the basketball hall for example was imported from the USA and is the same, on which the NBA-stars sink as many baskets as possible.

The aquatic centre of the Gloria Sports Arena on 5.800 sq. offers next to Olympic pools also areas for diverse exercises before or after the swimming practice.  Among the equipment are an Olympic outdoor pool with 10 lanes, an 50 m indoor pool with 5 lanes, an outdoor pool for short distances with 6 lanes (25m), an Olympic diving pool, an Olympic water polo pool and a rehabilitation pool. The aquatic centre is equipped with a mobile Contemplas high performance video analysis system for all pools.

Whether professional or amateur – in the Gloria Sports Medicine & Performance Centre professional sports scientists look after the concerns of all guests. The areas of performance physiology, movement control, biomechanics and all sorts of sports performance analysis are covered here. Gloria Sports Arena is a certified physiotherapy partner of Eden Rehab in Germany (www.eden-reha.de). All requirements for modern physiotherapy and sports rehabilitation are fulfilled. The experienced team consists of sports scientists, physiotherapists, sports coaches and sports massage therapists, who were educated in leading institutions in Turkey, Europe and the USA. Those who wish to overnight in the Gloria Sports Arena can enjoy the sports hotel with 100 rooms, all looking over the track and field stadium. The hotel´s own restaurant offers an extensive buffet in the morning, noon and evening with focus on healthy nutrition.

First LEED Gold Certificate in Turkey
Özaltin Holding is known for its passion for the environment. As one of the leading construction companies of Turkey they have committed themselves to realize environmentally compatible projects. Among them is the 5-star Gloria Verde Resort, attracting the eye with its construction around the nature, and now also the Gloria Sports Arena, being awarded as one of the most energy- and resource-saving construction of Turkey with the LEED Certificate (Leadership in Energy and Environmental Design). The Gloria Sports Arena is the first construction of Turkey with this worldwide recognition.  This is an important milestone for Gloria, duly framing the own campaign "Habitat of Gloria – For our future".

Sports Events 2016
From top-class dancing tournaments via swim camps with professional coach Dirk Lange, former head trainer of the German and South African national league, up to the most challenging endurance sports event of the world, the Ironman, and the new three-week summer camps for kids from 6 to 16 – numerous occasions ensure that the Gloria Sports Arena remains a sporty melting pot of diverse cultures.