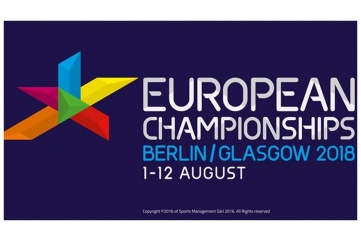 The hosts and rights holders of the innovative event taking place in Glasgow and Berlin in 2018 have unveiled a new, unifying brand identity under the name “European Championships” – shortened from the previous title of “European Sports Championships”.

The multi-sport event in August 2018 brings together the existing European Championships of athletics, aquatics, cycling, gymnastics, rowing and triathlon, and also introduces a new golf team championship onto the European stage.

The brand is represented by a new logo, the star-like “Mark of a Champion” said to represent the vision at the heart of the new multi-sport championships, the aim of which is said to “create a must-attend, must-watch experience that elevates the status of European Champions”.

The logo was created in partnership by the sports federations, Host Cities Glasgow and Berlin and broadcast partner the European Broadcasting Union (EBU).

“In Berlin we have a fantastic host city for our Championships, and in the German athletics federation, we have a committed partner who have produced a great generation of athletes. We are all committed to delivering the best-ever European Athletics Championships.”

The organising partners said the event will take place every four years, anticipating a television audience of around 1 billion, plus multiple digital and radio platforms in 2018.

Around 1500 athletes are expected to compete in Berlin from 7-12 August as part of the European Athletics Championships, while approximately 3025 athletes are set to visit Scotland for the other six events between 1 and 12 August.

“We have worked together with these amazing sports to create something that reflects all of our values by embracing our ambition, our strength in unity and our ongoing journey to provide opportunities for all of our citizens through the power of sport and culture.”

Senator Frank Henkel, City of Berlin, said: “We are really pleased to see the unveiling of the umbrella brand for the European Championships of which we are part. Our city is well underway in its preparations for the European Athletics Championships, and our own Berlin 2018 mark will be unveiled soon.”

Each of the participating sports are due to unveil their own event logos in the coming months.